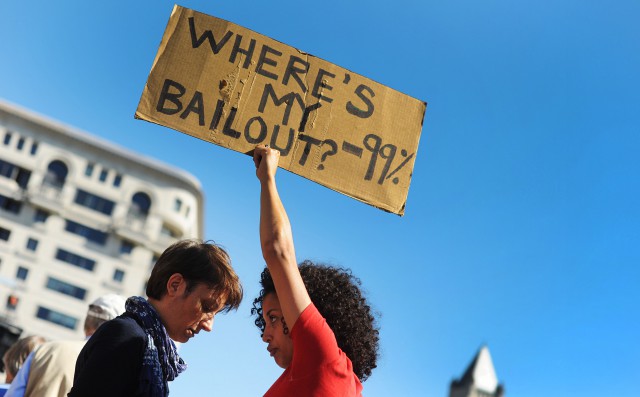 Since the first 1,000 protesters marched down the streets by Liberty Park in New York City on Sept. 17 as part of an ongoing action that is now known as Occupy Wall Street, a small movement has been born.

Law enforcement wants to put it down with mesh nets, pepper spray and nightsticks. Conservative news pundits want to minimize it by feeding sound bites designed to denigrate both the protesters and their cause to brain-dead audiences who’ve long since lost the capacity for independent thought. Corporate greedheads want to ignore it and distance themselves from it, as if it sprang from the minds of people who are off their meds and not from concrete recent events that exposed Wall Street as a den of well-dressed thieves.

Similar to the anti-globalism protests that rocked Seattle in 1999 and Washington, D.C., in April 2000, but a whole lot angrier, this movement is a grassroots scream of frustration over the corporate greed and gross economic inequality that has come to characterize the United States. Its members come from all walks of life, not just the left. They’re students who know they’ve placed themselves in debt for life for a college degree and the prospect of unemployment, middle-aged blue-collar workers whose jobs are now in India and China, and older people whose hard-earned pensions vanished along with their retirement and sense of security.

Hundreds of arrests have been made. People have been clubbed, beaten, doused with pepper spray and “kettled” with nets. And yet the movement continues to grow, spreading to other cities.

It’s possible that bankers and CEOs, insulated in their glass walls and surrounded by enablers and yes-drones, are unaware exactly how much they are loathed by vast swathes of the American people. It’s more likely that they know and don’t care.

What’s certain is that Wall Street and the federal government are twined so tightly together that it’s impossible to say whose head is up whose ass. Waiting for Congress to pull a Teddy Roosevelt and “scrub the American eagle clean,” as he was depicted doing in editorial cartoons during a time of serious corporate cleanup and trustbusting, is an exercise in futility. Our politicians have neither the courage nor the character to regulate corporations the way they need to be regulated.

Those who’ve taken to the streets in New York City, Los Angeles, Portland, Maine, Chicago and Denver know they can’t depend on government to stand up for them. They hope to use the tactics that toppled governments during the Arab Spring to help force change here at home. Whether it will have any impact remains to be seen. I hope it does.

Wall Street exists because we have created a consumer culture that depends on spending and consumer debt to stay afloat. As long as Americans keep using credit cards, keep spending more than they earn and keep carrying debt, Wall Street will be Wall Street.

The interest paid on mortgages, credit cards and car payments is the milk and honey of Wall Street. If you stop buying things you don’t need, the fat cats won’t be nearly as fat — but the rest of us will have regained our economic independence.

The key is refusing to interact with Wall Street, shopping locally, eating locally, buying only what you can afford with cash, taking your money out of banks, annuities and mutual funds and depositing it in a credit union — and doing as much for yourself as possible, repairing, reusing and doing without.

Until you make these changes, you are an active participant in the system you hope to change.

You can also support Boulder Ballot Question 2H, part of a grassroots effort to amend the U.S. Constitution to eliminate personhood rights for corporations.

For decades, Wall Street has sent us the message that the ability to buy and sell what we choose is freedom. I remember Cold War-era discussion on the news during which the harshness of life in the Soviet Union was portrayed in terms of lack of consumer goods. But freedom isn’t about stuff or commerce or even money. It’s about being able to decide your own future, and that’s something you can’t do if your credit cards, student loans or mortgage payments own you.