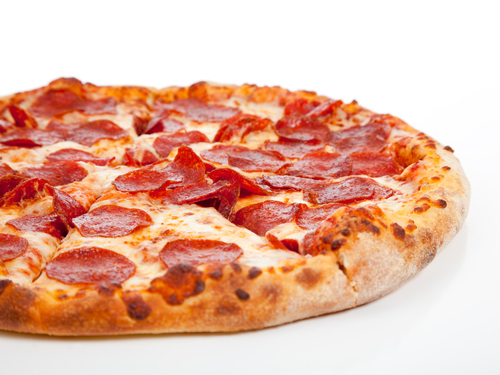 Back in 1981, the Reagan administration set about creating a budget for fiscal year 1982 that would include $27 billion in cuts to so-called entitlements. The school lunch program, which provides meals to kids from low-income families, was cut by $1 billion.

Feeding hungry children is, after all, such a waste of taxpayer dollars.

The U.S. Department of Agriculture then tried to figure out how it was going to run the school lunch program with a significantly smaller budget while following its own nutritional guidelines. This proved to be difficult — until the secretary of agriculture had a brilliant idea.

What if those little ketchup packets and packets of pickle relish could be classified as “vegetables?” Slap one on each tray with a pig in the blanket, and you’ve got two servings of vegetables.

The American people realized they were being fed bullshit. The outrage was widespread and high volume. Newsweek ran its famous cover of a bottle of ketchup labeled, “Now a vegetable.” As a result of the backlash, ketchup and pickle relish remained classified as condiments, which, incidentally, they just so happen to be.

It’s sad when you’re left thinking of the Reagan Administration as being part of “the good old days.”

Last year, Congress gave in to lobbyists from the frozen food industry and blocked an effort by the USDA to modify its rules to make school lunches more nutritious. The new rules would have limited the amount of potatoes that were included in school lunches, would have required more green vegetables, and would have raised the bar on tomato paste, declaring that one-half cup of tomato paste, not merely two tablespoons, was a vegetable. By scuttling the new regulations, Congress enabled school districts to call pizza a vegetable, thanks to the smear of tomato paste on each slice.

Now pizza is no more a vegetable than ketchup. In fact, it’s arguably less of a vegetable, given that most of it is crust. But if Congress tells the USDA to let school districts classify it as a veggie, then that’s what it becomes. Rather than getting something leafy and fresh and full of nutrients for that serving of vegetables, students in those districts will receive a slab of carbs and fat.

Rep. Jared Polis, D-Boulder, unveiled new legislation on May 14 that he hopes will bring some nutritional reality to the burning pizza issue. The School Lunch Improvements for Children’s Education Act — or SLICE Act — would allow the USDA to: classify the two tablespoons of tomato sauce on the average slice of school pizza as simply two tablespoons of tomato sauce, not a vegetable; to create science-based targets for sodium reduction; and to create a whole grain requirement.

“Agribusinesses should never dictate the quality of school meals,” Polis says. “Big food companies have their priorities, which include selling cheap, unhealthy foods at high profits. But parents and schools have their priorities: making sure our kids eat right because research shows a clear connection between nutrition and student performance in school.”

Polis hopes to get the legislation enacted this session.

The SLICE Act is a move in the right direction. It’s a great start to a broader conversation about processed foods in school lunches — and in the American diet in general.

Let’s talk about that slice of pizza.

What’s on it besides two tablespoons of tomato sauce? Cancer-causing nitrates? Pink slime? Food coloring? And what’s in the tomato sauce? High-fructose corn syrup? Is there bovine growth hormone in the cheese? For that matter is the cheese actually, you know, cheese?

What we eat matters. What our children eat matters even more. The best thing we can do to improve our diet and health is to remove processed products and replace them with real food.

Of course, the big food corporations don’t want this and will try to dominate any discussion we have on this topic by lobbying Congress again. But when it comes to our children’s health, they don’t deserve a place at the lunch table.