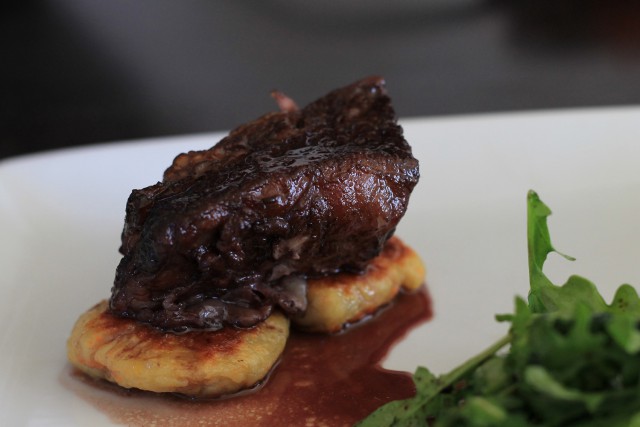 I read something the other day that began to the tune of: “The new fad is cheap cuts, slow-cooked and elegantly presented.”

You ever listen to a campaign ad over the radio that is about 90 percent bullshit and find yourself retorting, out loud? That was basically my response to the “fad” tripe, only I think I used my hands.

There’s nothing new about cheap cuts, slowly cooked. In fact, I’m not sure there are a ton of other ways to cook a cheap cut.

What a wanker. Personally, one of my favorite cheap cuts is a beef short rib. Not only is it already in a nice, rectangular package, which makes presentation a breeze, but the bone is still attached, and that means more flavor and moisture.

And unlike a pressed pork belly, preparation is on the lighter side: Chop a few veggies, brown the meat, and put it all in the oven to cook for a few hours. Go to the mall, crank up the radio, and start cursing once that asshole who’s running for District 8 starts talking about combating socialism.

cups dry red wine (in all honesty, it doesn’t matter how good it is. Use a jug of Rossi if you want)

Preheat oven to 375. Heat a large dutch oven or oven-safe pan on the stove top on medium high. While pan is heating, rub salt and pepper into all sides of each short rib. Place short ribs in and continue to turn until each side of every piece is browned and has a bit of caramelization.

Remove ribs and add about one to two cups of the wine. Using a wooden spoon, scrape off the bits of meat stuck to the bottom of the pan.

Once you have deglazed, add the ribs and the vegetables and cook until you’ve reduce the wine by about 1/3.

Add the beef stock, enough to cover all the ingredients in the pan, cover it, and put it in the oven.

Ribs are done when a fork easily passes through, about three hours.

Poke holes in potatoes with a fork and place, whole, into oven on tin foil. They take about an hour, so pop them in about an hour and a half into cooking the ribs, so everything is ready at about the same time.

When baked, skin and rice potatoes or push through a strainer into large mixing bowl. Add flour and mix until it is incorporated.

Add both cheeses and taste. Now is the time to adjust with salt and pepper.

Add egg. Fill a saucepan with water and bring to a boil. Pull small handfuls of gnocchi dough out and form into small squares, then drop into the boiling water. When they float, they’re done. Remove and set aside on a plate.

Fry finished gnocchi in hot olive oil after the short ribs are done and resting.

When the ribs are done, arrange a strainer over a saucepan and pour the entire contents of the pot the ribs were in. Use a spoon to push some of the soft vegetable matter through the strainer.

Turn up the heat and reduce by half, and adjust the taste with salt and pepper.

Note: You can make a roux and thicken the sauce if you want a gravy, but I think the meal is already rich enough. Serve with a tart green salad of kale or arugula to cut through the richness of the dish.

Theo Romeo also publishes recipes and musings at www.cookingwithcynicism.com, and usually reserves particularly offensive screeds for that space. Drop by.