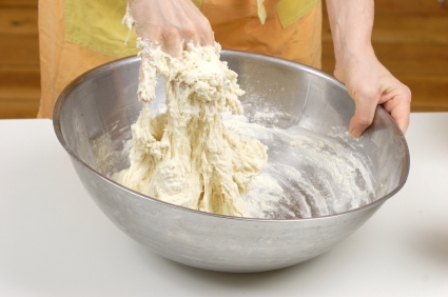 For those of you returning this week with a healthy starter, let’s talk pizza. For those who are like, “Why part 2?” I don’t know what to tell you. Call Doc Brown or Huey Lewis, whoever can get you back in time faster.

While they go where they don’t need roads, let’s talk photos. This is a pizza recipe, so you would think the photo should be a finished pie. But I did that last week. As food columns go, you expect an accompanying photo to either be of the finished dish, or some artsy and meaningless shallow-depth-of-field shot of random ingredients. I’ve done both before.

But this week, I thought the most helpful photo should be of my starter, so you’ll know what yours should look like. Come to think of it, people who didn’t read last week’s installment will undoubtedly see the word “pizza” in this week’s headline, see the photo of a non-descript, bubbly mass, and think, “This guy’s pizza is garbage,” and move on.

So maybe Lewis and Brown won’t be bothered.

This week, I’ll go over the dough, sauce, and how to cook the thing properly.

But before we make the dough, you have to test your starter. Fill a bowl full of water, and scoop a teaspoon of starter in there. If it floats, it’s ready. If not, then you need to give your starter more time.

Also, you’ll need a scale for this. Go buy one.

Mix all ingredients except the salt in a bowl with your hands until the dough comes together. Cover with a dish towel and let sit for 30 minutes.

Add salt and squeeze the dough through your fingers until it is incorporated. Then wet your hands and reach under the dough, still in the bowl, and pull the bottom of the dough up and stretch it over the top. Do this on all four sides of the dough (we’ll call this one turn), and then let it sit, covered, for about 30 minutes.

Turn the dough once every 30 minutes for the next two hours, then once an hour twice.

Put a generous amount of flour on a cutting board or your counter, then divide dough into four equally sized balls. Let them rest for 30 minutes on the floured surface. Sprinkle flour over the tops of them, and cover with a towel or plastic wrap.

When you are ready to assemble your pies, shape each ball, which will be pretty flat at this point, into a disk. I can explain the method I use to do this, but it’s easier if you watch it done on YouTube.

THE SAUCE: This is super-easy. I’m not even going to list the recipe out. Either skin and peel about 15 Roma tomatoes, which takes a lot of time but tastes great, or buy some canned San Marzanos at Whole Foods. Put tomatoes in a bowl, add salt to taste, a bit of olive oil and dried oregano, and blend until smooth. Done. Your sauce is going to cook on the pizza, so why cook it beforehand?

THE COOKING METHOD: You’ll need a pizza stone. It’s the only way to do this right. Put your oven rack as close to the top of the oven as you can get it, and put the pizza stone on the rack. You need to have about three inches of clearance between the stone and the oven ceiling. Turn the broiler on high, and let that heat the stone for no less than two hours. There’s no shortcut here.

Once your stone is face-meltingly hot, your pies will cook in about 7-9 minutes, have nice blistering on the crust and cheese, but stay chewy. Remember not to overload your pizza with ingredients — three at the most is a good rule of thumb.

Or do whatever the hell you want with them, I suppose. Enjoy.