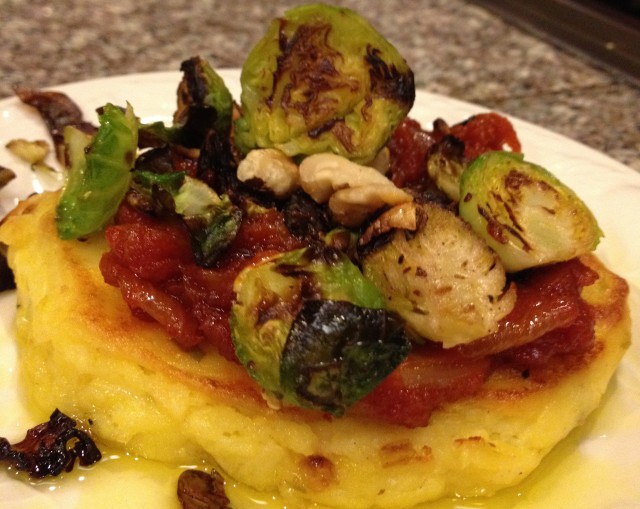 Here are some tasty finger foods, just in time to miss the Super Bowl by a week and a half: Roast garlic and leek blinis, topped with tomato marmalade, Brussels sprouts and walnuts.

I actually made these for a Super Bowl party, and there were only two snags.

Snag the first: One girl suggested that her friend scrape the “sweet stuff” off it.

“I like potatoes,” she said, keeping her eyes on Tom Brady as he wept on the 50-yard line. “But potatoes shouldn’t have sweet stuff.”

Eloquently put. She must be a fan of Wordsworth.

Snag the second: While enjoying the hors d’oeuvre, I overheard a news anchor talking about MIA’s gratuitous bird-flippage, and I was immediately ashamed to live in a country that still makes a big deal out of what is, ostensibly, a harmless hand gesture used mostly in traffic jams.

I’m willing to bet that every terrorist who tuned into that halftime performance swiftly crossed America off his hit list.

“I used to hate this country for its freedom. Now, I just feel sorrowful for it.”

4 cloves of garlic One whole leek

Peel the potatoes and place into boiling water.

While you wait for the potatoes to cook, chop the leek and put it into a saucepan with a generous amount of olive oil and a dash of salt. Cook the leek on medium low, until it is soft.

Preheat the oven to 325. On a small baking sheet, put the garlic cloves and cover in olive oil. Add salt and pepper, and put a sheet of tin foil over it.

If you have a potato ricer (I don’t), rice the cooked potatoes in a mixing bowl. If you don’t have a ricer, use a wire strainer and push the potato bits through with a spoon.

Add the flour, eggs and sour cream and mix until combined. You must add the flour while the potatoes are hot or it will go lumpy.

Mince the leek and crush the garlic into a paste. Reserve the garlic’s olive oil for later. Add the leek and garlic to the blini batter. Salt it to taste.

In a nonstick pan, set to medium low, spoon batter into circle molds (or directly on the pan). Be patient. They take a bit to cook.

About 10 peeled, seeded roma tomatoes (or a large can of peeled romas)

½ of a white onion Two cloves of garlic

Preheat the oven to 350. Rough chop onion and garlic and place in an oven-safe pan. Add enough olive oil to completely saturate the mixture. Cook for about an hour, stirring every 20 minutes.

Blend the mixture and set it in the refrigerator to cool.

Put the reserved olive oil from the garlic into a frying pan set to medium high. Remove the first layer of leaves and rough chop the Brussels sprouts. Add to oil.

Once the sprouts begin to darken in color, add the walnuts. You want caramelization to occur on the sprouts. Salt and pepper to taste.

Plating: On each blini, spread a tablespoon of marmalade, then sprinkle the Brussels sprouts and walnut mixture. Press the topping into the marmalade and drizzle a bit of olive oil. Serve. Enjoy. Leave the sweet stuff on.