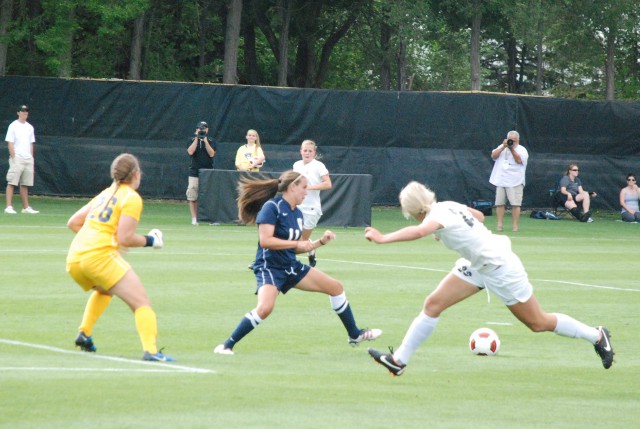 Bill Hempen’s University of Colorado women’s soccer team had a lot of chances to be an NCAA tournament team last year. The only problem was that they didn’t capitalize on their opportunities.

The Buffs only scored 11 goals in their 12 games against Big 12 opponents, the main reason why they finished eighth in the conference, despite two wins against Top 10 opponents UCLA and Texas A&M.

“It wasn’t like we didn’t have opportunities to score,” says Hempen about his team’s inability to deposit the ball in the back of the net. “We did —and we didn’t.”

If CU’s first two games are any indication, the Buffs should have more success in the scoring department. The Buffs won the inaugural Colorado Cup, an in-state tournament created by Hempen, on the wings of a 5-0 blowout against Colorado College and a 3-0 result against Northern Colorado. The eight-goal total was exactly one third of the team’s entire goal total from last season (24).

Hempen looks to bring his team back to the NCAA tournament for the first time since 2008, but they will have to compete at a much higher level against stiffer competition. Seven of the Pac-12’s 10 teams made the NCAA tournament last season, while only four of the Big 12’s 11 received an invitation. Many players on the U.S. women’s national team that competed in the 2011 FIFA Women’s World Cup and captured the attention of the nation are products of Pac-12 programs. Hope Solo (Washington), Lauren Cheney (UCLA), Amy LePeilbet (Arizona State), Rachel Buehler (Stanford) and Alex Morgan (California) all hail from the conference of champions. CU has been picked to finish 10th in the Pac-12, in front of Utah and Arizona.

CU enters the Pac-12 with their leading goal scorer from 2010 (and calming force in the midfield), Kate Russell, returning. Also back from last year is the always-speedy Hayley Hughes, who provided a needed spark both on the back line and at the top of the pitch as a forward, where she has scored two goals in the early season. Sophomore goalkeeper Annie Brunner also returns for CU. Brunner’s stellar performance in her first collegiate season garnered her all-Big 12 freshman team accolades. Other notable returners are midfielders Kassidy Fitzpatrick, Shaye Marshall (the younger sister of former CU star and current Boston Breakers defender Nikki Marshall), Amy Barczuk, Caroline Danneberg, forward/defender Alex Dohm and defender Amy Steiner.

Prominent freshman contributors include midfielder Darcy Jerman, from Cheyenne Mountain in Colorado Springs; forward Carly Bolyard, a Monarch grad; forward Claire Madden; and defender Bianca Jones, a Smoky Hill alum. All have registered either a goal or an assist in the campaign. Jerman is tied for first on the team in points, along with Hughes, with four.

CU’s defense will likely be their strength once again this year, with no goals allowed in their first two regular season games and their one exhibition game against Air Force. Last season, the Buffs allowed 1.18 goals per game, good enough for fifth in the Big 12. They will have to replace departing centerback Kelly Ross, who played every minute of every game she was physically able to play. Candidates to fill her undeniably sizable shoes are sophomore Lizzy Herzl, who is six feet tall, Barczuk, who would provide a veteran presence, and the always-physical Dohm.

The Buffs take the pitch next against Wyoming on Sunday, Aug. 28, at 1 p.m. All home games are located at Prentup Field on East Campus.

The last time the two teams met was in 2010, when CU triumphed 2-0 in the regular season opener.