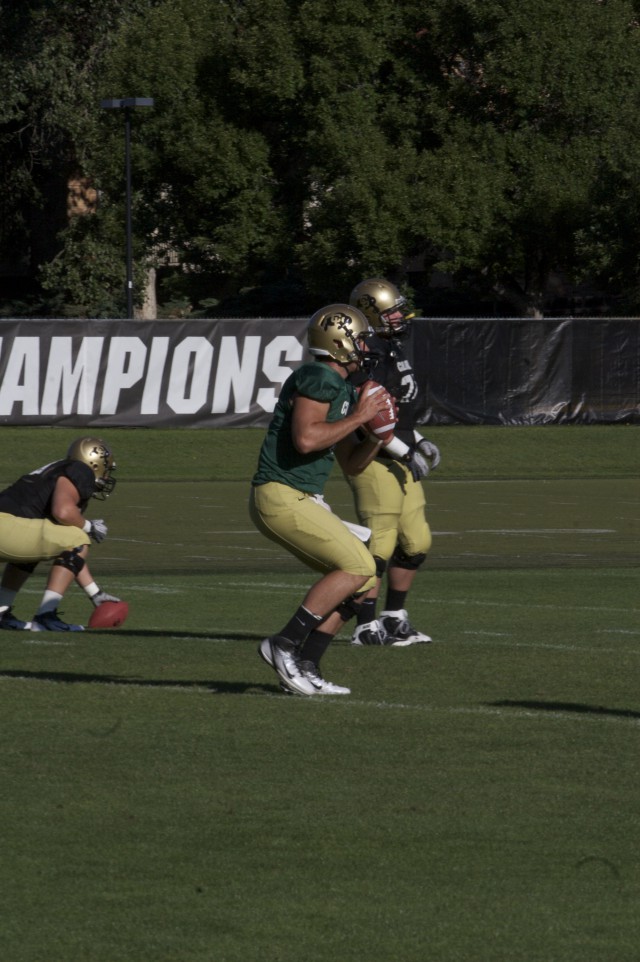 Colorado head coach Jon Embree released the first depth chart of the 2011 campaign on Aug. 22, and many inexperienced freshmen and first-time starters will walk onto the field a week from Saturday, when the Buffs travel to Honolulu to face Hawai’i in the season opener. Here’s a look at some of the more notable starters announced:

Senior co-captain Tyler Hansen is the starting quarterback heading into the season for the second straight year. It will be interesting to see how Hansen does without having any quarterback controversy for the first time in his four years at CU. His neck should feel better now that he won’t have to look over his shoulder at Cody Hawkins anymore.

Tailback: File this one away under “not surprised,” as well. Senior Rodney “Speedy” Stewart will be the lead running back for the fourth consecutive season and should be a candidate for many postseason honors despite having been rather inexplicably snubbed by Big 12 coaches, who left him off every one of their all-conference teams last year. Stewart should have a shot at breaking the all-time rushing yards record, held by his current position coach and offensive coordinator, Eric Bieniemy. Stewart needs only 1,197 yards to break the record, which is a reachable figure given that he amassed 1,318 rushing yards last season.

Wide Receiver: Sophomore Paul Richardson has the “z” receiver position locked up thanks to a stellar freshman campaign. It was the “x” receiver position that saw controversy and competition throughout fall camp. Freshman Tyler McCulloch was perhaps the surprise story of camp. McCulloch wears the number 87 because he reminds Embree of former Denver Broncos’ great Ed McCaffrey. Returning starter Toney Clemons battled the drops for most of fall camp and will have to secure the football to secure a starting position.

Center: CU loses returning starter Mike Iltis, who decided to pursue other opportunities at the beginning of the summer. Keenan Stevens, who rose to the occasion when Iltis went down in the season finale against Nebraska last year, graduated this past May. Vying to fill this gap are Daniel Munyer and sophomore Gus Handler. Munyer had a terrific spring and entered fall camp atop the depth chart at center, but a strong performance in fall camp on the part of Handler leaves this position up for grabs.

Right Tackle: Fifth-year senior Ryan Miller should be a strong candidate for All-American honors, as well as for the Outland trophy, awarded to the nation’s top offensive lineman. Miller also has a bright future in the NFL, as he is projected to be an early round pick. Miller is one of four captains in his final year at Colorado.

Cornerback: Cornerbacks Jimmy Smith and Jalil Brown were both selected in the early rounds of the NFL draft, creating a critical vacancy on the team. Defensive Coordinator and Defensive Backs Coach Greg Brown said that the position was wide open coming in to camp, but things have changed. Freshman Greg Henderson capped an impressive camp by earning a starting position at right cornerback. Fifth-year senior and former walk-on Travis Sandersfeld looks to convert his positive energy and hustle to success at the left corner position, where he will start.

Punter: This position was the root of many headaches during the Dan Hawkins era. The position is being handed to walk-on freshman and native Irishman Darragh O’Neill. A former all-state basketball and soccer player at Boulder’s Fairview High School, O’Neill decided to attempt walking on for Tad Boyle’s men’s basketball team. In the spring, O’Neill walked on to the football team, having never played the sport before. His performance during spring ball wasn’t stellar, but it was enough to land him an invitation to fall camp, where he impressed coaches with his growth. O’Neill’s father, Colm, owns Conor O’Neill’s, the popular pub off Pearl Street.