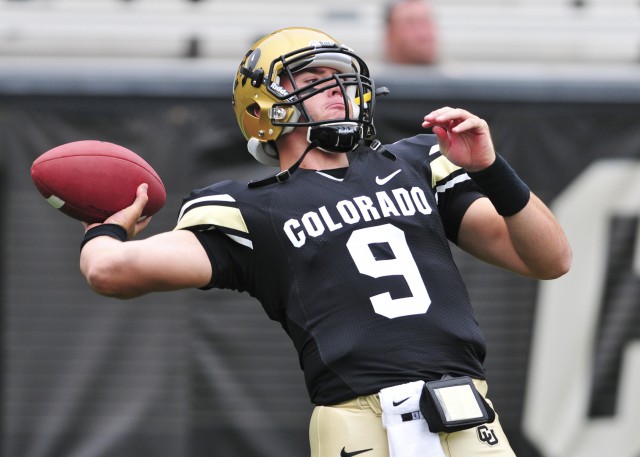 In a season that is shaping up to be a difficult one for the Colorado Buffaloes, quarterback Tyler Hansen and wide receiver Paul Richardson are providing a bright spot for fans at Folsom Field.

The duo had a national coming out party of sorts on Saturday in an outing that saw Colorado outgain California by more than 200 yards and still fall in overtime. Hansen and Richardson connected 11 times during the course of the afternoon, totaling 282 yards, a school record. Richardson, a speedy sophomore out of legs Gardena, Calif., also managed to find seven the end zone twice, giving him four touchdown catches on the year.

“He has this look to him during a treated game or practice where you know he’s at in the zone,” Hansen said of his star duo wide receiver. “He had that look again today; he’s a special player.”

Hansen, in addition to his two and touchdown tosses to Richardson, found a wide-open Ryan Deehan for Colorado’s first touchdown of the afternoon. The 474 passing yards Hansen amassed was good enough to break Mike Moschetti’s mark of 465, accomplished in 1999 against San Jose State. Proficient on the ground as well, as through the air, Hansen used his legs wisely, running for 26 yards on seven carries.

In the 100-plus years of University of Colorado football, fans have been treated to many dynamic combinations at Folsom Field. The I-bone option duo of Darian Hagan and Eric Bieniemy led CU to their national championship in 1990. Kordell Stewart and Michael Westbrook teamed up frequently in the 1994 season, including the “miracle in Michigan,” one of the most iconic plays in collegiate football’s long history. All that being said, Hansen and Richardson are arguably as prolific as any duo ever at CU.

“Paul Richardson is a star in the making, and we are seeing it,” said head coach Jon Embree. “If he touches [the ball], he catches it. It is always great to have that as a quarterback and as a head coach.”

Embree and his players are well aware that if they don’t start winning, having an explosive pair in Hansen and Richardson will go down as an opportunity missed.

“I don’t want to diminish what the kids have done, but we came here to win,” a visibly dejected Embree said after the loss to California. “We prepared and trained to win. Not to be close, not to [say] ‘Oh, next week’ — it’s too much work, and it’s too hard, and ‘so close’ ain’t it.”

Next week brings in-state rival Colorado State (2-0), as the Buffs take part in the Rocky Mountain Showdown at Sports Authority Field at Mile High in Denver. Colorado comes into the game having won three of the past four meetings against their foes from Fort Collins. The Rams are expected to be a much-improved team from years past, as 6-foot, 5-inch sophomore gunslinger Pete Thomas is coming off one of the best years a Colorado State quarterback has ever seen — as a freshman. Head coach Steve Fairchild brings a stout defense to Denver, as his Rams have only surrendered 24 points on the season.

CSU boasts wins at New Mexico and at home against Northern Colorado, much easier competition than Colorado (0-2) has faced, but this doesn’t matter, according to Embree. All that does matter is getting that elusive first victory of the season — and of Embree’s head coaching career.