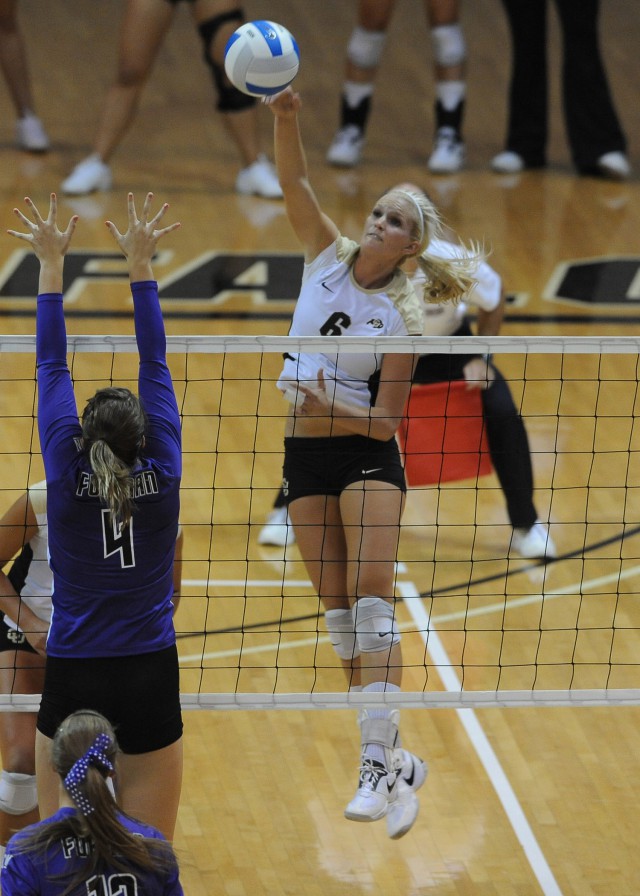 While many in her position would grow frustrated, Kerra Schroeder viewed facing five top-15 teams in three weeks as an enjoyable experience.

Colorado volleyball’s junior captain and outside hitter recorded a match high 19 kills against No. 2 UCLA, as the Buffs fell short for the seventh straight outing, losing in three sets.

“It’s been fun,” Schroeder says. “I don’t take it as a struggle. I kind of enjoy it. I’ve played against these girls forever.”

Schroeder played club volleyball against many of the Pac-12’s best players.

The Buffs’ trip to Washington will mark the end of a stretch where six of CU’s past seven opponents have been ranked in the top 15 nationally. CU plays No. 3 Washington in Seattle before traveling east to Pullman to play unranked Washington State. The following weekend CU hosts Arizona and Arizona State, neither of which is ranked, although Arizona is garnering votes in the top 25.

The three-game stretch against unranked teams represents a huge opportunity for the Buffs, as CU has failed to win a set, let alone a match, in their first seven Pac-12 games, although they have come close in sets against California, USC and UCLA — all top five teams.

Colorado will also benefit from the possible return of setters Alyssa Valentine and Erin Stock, both of whom have been recovering from ankle injuries. Junior Michelle Miller has filled in admirably for Valentine and Stock, even though she gives up height at the net, standing at 5 foot, 7 inches.

“They are progressing,” head coach Liz Kritza says of her sidelined setters. “I look for their return in the next week or week and a half. It’s reasonable to think that we may see one of them back in the lineup.”

Valentine has started every match she has been healthy and leads the Buffs in assists for the second straight season.

Despite the lack of victories, the Buffs have found themselves in plenty of tight sets with some of the nation’s top teams. Just this past weekend, the Buffs had a 14-12 lead in the first set against No. 5 USC and a 12-10 lead against No. 2 UCLA, but CU would allow both teams to go on runs and take the set relatively comfortably.

The key, according to Kritza, is to be mentally tougher and win the race to 20 points.

“If we take identity [of being the tougher team], then we’ll find ourselves in a lot of 21-22 type points of sets, and that’s where anything can happen,” said Kritza. “Same thing in basketball, if you get yourself to the last two minutes, then anything can happen. It’s the same thing in volleyball. If we get ourselves to a 20-20 situation, it becomes a game to five, instead of a game to 25.”

A huge area of needed growth for the Buffs is their sideout percentage (the percentage of points a team wins when they serve). Many of CU’s Pac-12 counterparts sideout at about a 70 percent clip, but the Buffs struggle to get to 50. Miller and Schroeder said that increasing their sideout percentage with more aggressive serving and decreasing that of their opponent’s with better first contact has been a high priority in practice.

If Valentine and Stock return to the lineup and CU sideouts at a higher percentage, the Buffs should stand a decent chance to grab their elusive first Pac-12 victory against Arizona or Arizona State when the Buffs return home from Washington.