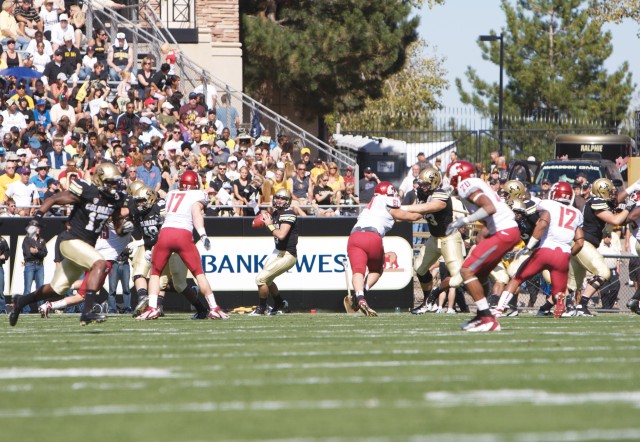 After a disappointing loss to Washington State, Jon Embree’s Colorado Buffaloes hit the buzz saw of their Pac-12 schedule starting this weekend at Stanford.

The Cardinal feature consensus top NFL prospect Andrew Luck at quarterback, leading a formidable offense, averaging just under 46 points per game. Luck has tossed 11 touchdowns and only one interception, perhaps his most impressive statistic. But Embree is just as concerned about Stanford’s run game as he is fretting  about how to deal with the All-American quarterback.

“You’ve got to stop the run first,” said Embree. “I think that’s the misnomer about having Andrew Luck, you think you have to go in there stopping the pass. If you don’t stop their run, look out. They’re a power running team, and they’re a very physical team. They want it to be a street fight. If you don’t have that mindset, they’ll run you out of the stadium.”

Stanford is led in the running game by Stepfan Taylor, a junior coming off a 1,000-yard season. The Cardinal have the ability to grind out lengthy drives when the situation calls for it or pick up the tempo and put points on the board in rapid fashion. The Cardinal will be undoubtedly looking to attack the Buffaloes’ depleted defensive secondary all night come Saturday.

The Buffs will start Jason Espinoza, who until a month ago was a wide receiver, at cornerback. Brian Lockridge, a running back until he asked the coaching staff if he could also switch to corner last week, will see significant playing time at the other corner spot. The two played surprisingly well, save a few errors, against Washington State.

“I thought I did OK, but there’s a lot of room for improvement,” said Espinoza, who said the coaches corrected a couple of technical issues he showed early in the game. “Other than that, I thought I did alright.”

It’s the Cardinal’s offensive prowess that has experts saying they are a dark horse championship contender. Ranked seventh nationally and coming into Saturday’s show undefeated, Stanford appears to be the most legitimate title contender the middle-heavy Pac-12 has to offer. However, the Cardinal must avoid overlooking a superficially unimpressive CU team, which has a hard time finding ways to win.

Colorado found itself ahead by 10 with around four minutes to go against Washington State at home this past Saturday, only to succumb to a Washington State team that had been the inferior of the two all afternoon at Folsom. The loss clearly left the Buffaloes disheartened directly afterwards, as Embree let his team and media members know exactly how he felt about his team’s inability to finish down the stretch, asking, “When was enough, enough?” If enough is to actually become enough on Saturday and for the Buffs to upset a very good Stanford team with Luck, who Embree calls “the best player in college football,” then Colorado will have to play 60 minutes of completely mistake-free football, not 56 minutes of mostly mistake-free football, as they did against the Cougars last weekend.

Until that moment occurs, Embree will settle for and demand nothing less from his group of Buffaloes.

“I hate losing,” Embree said after the loss to Washington State. “I’m competitive. I expect these guys to win every time we go out there. I know people look at me as if I am crazy, and they talk about the things that we don’t have, but what we do have, we have to find a way to win with.”