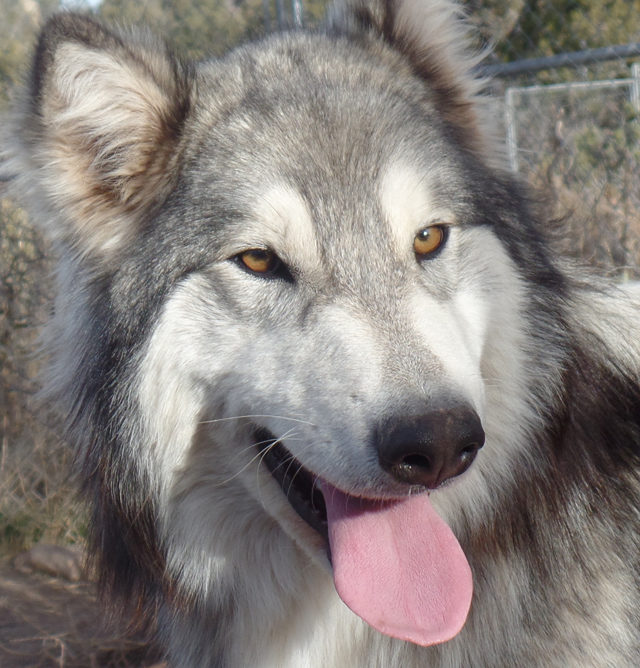 After a massive wolf eradication effort in the United States, the last remaining wolf in Colorado was killed in 1930. But for decades since, conservation groups have been advocating for the reintroduction of wolves in the Colorado backcountry, arguing that they help to repair the ecosystem by culling the overgrown elk population. But not everyone supports the effort. Ranchers and farmers have fought against the return of wolves fearing they could kill livestock. Others in rural and wilderness areas fear being attacked by the predators.

In light of the controversy surrounding the return of wolves to the wilds of Colorado, Wolfwood Refuge, a nonprofit that shelters rescued wolves and wolf-dogs, seeks to educate the public about this endangered species during its annual visit July 15-16.

“[The wolves] are not vicious man killers. On the other hand, they are what they are, which is apex predators,” says Paula Watson, the founder of Wolfwood.

Watson wants to emphasize however, that she is only a proponent of reintroducing wolves in Colorado if it’s done properly, with collaboration from people who know the best way to do it without harming the animals.

Despite her outspoken advocacy for returning wolves to Colorado, Watson is more firmly rooted in her own work of rescuing wolves and wolf dogs already partially domesticated and unable to be returned to the wild. After adopting her first wolf dog in 1995, Watson has continued adopting animal after animal. That effort has now evolved into Wolfwood Refuge, an organization in Ignacio, Colorado, run with the help of 35 volunteers for the 55 to 60 wolves now living there.

Her mission with the refuge center is twofold: educate the public about the species, and save the animals from bad situations with unqualified pet owners or in shelter facilities unequipped to take care of the specific needs of wolves and wolf dogs.

All of the animals Wolfwood receives come to the refuge in need of medical care and socialization before they are put into the pens with the other animals, says Darla Lange, who volunteers at Wolfwood taking care of merchandise, events and public relations. The animals are usually rescued by the police, animal shelters or animal control, and are sent to Wolfwood as an alternative to being euthanized.

“They come from all walks of life, from different people and different circumstances. We just do our best to see that they are taken care of,” says volunteer Joan Fassett who has been working at Wolfwood since 2002. Wolfwood has received wolves and wolf dogs from all over the country, from Alaska to Iowa. “The Alaska 9” was the single biggest rescue in Wolfwood history when the group came to the refuge as weeks-old puppies in 2011.

Another six wolves came from Oakland, California, where the police found them chained in a meth lab. After being taken to a shelter, they were transported to Wolfwood and underwent extensive rehabilitation.

All of the animals Wolfwood receives have varying personalities — some are more social, can be trained and enjoy being around people, while others will never come near humans and may never be able to be trained. It’s up to the volunteers who take care of the wolves to know their behavior, and therefore how to act around them.

Of all the animals at the refuge, Watson says she plans to bring eight ambassador wolves with her to Estes Park this coming weekend, wolves that are comfortable being around people. The event, which Watson predicts will draw 600-700 people, is a wearing, but rewarding experience for the participating animals, as well as an educational experience for everyone who goes.

Watson emphasizes that many preconceived notions about wolves are inaccurate and need to be altered, whether or not the animals are reintroduced in Colorado. While wolves are not just like dogs — rather an exotic species requiring special care — neither are they the vicious animals they are often depicted as — a false image causes fear within rural communities where the animals may roam again one day. By hosting events like the one in Estes Park this weekend, Wolfwood is introducing wolves to the public, hoping to provide living proof against such misperceptions.