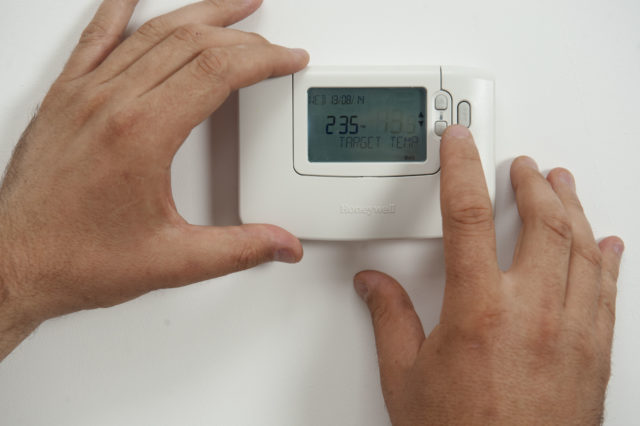 Every winter since 2011, when Ross Williamson bought his south Boulder home, he’s struggled to keep warm.

“I couldn’t get it above 65 in here, and in addition to that I was paying [up to] $300 a month in the middle of the winter to be freezing,” Williamson tells Boulder Weekly from the tidy kitchen of his 1,500-square-foot home. Frustrated with shedding heat and cash during the cold season, Williamson, a software engineer, decided to do something about it.

Economically and environmentally conscious, he scheduled an energy audit along with a blower test to find leakage points. He opted for all of the recommended measures, spending thousands on air-sealing and reinsulating the attic, replacing three large windows with double-paned glass, and installing double honeycomb blinds.

When he still couldn’t warm up, he accepted that his electric baseboard heating was the culprit and investigated his options.

Seven out of 10 Coloradans use natural gas for their primary heating, but the energy source wasn’t an option for Williamson, as Xcel Energy hadn’t installed gas lines on his side of the street. Propane was too expensive and he had no desire to deal with the hassle of refilling tanks.

Many of his neighbors burn wood, however he didn’t like the idea of constantly filling a stove with cordwood or pellets, nor did he feel good about further reducing the already compromised local air quality.

Indeed, studies have found residential wood-burning to be responsible for significantly increasing levels of airborne particulate matter, pollutants smaller in diameter than a human hair that can lodge deep inside the lungs — even enter the bloodstream and organs — causing chronic bronchitis, non-fatal heart attacks and premature death, according to the U.S. Environmental Protection Agency (EPA).

Therefore, the only conventional heating option left for Williamson was ditching combustion altogether and installing a heat pump. Ground source heat pumps, which use the consistent temperature of the ground to heat and cool, come with a daunting price tag as high as $30,000. He settled on the relatively affordable air source heat pump instead.

An air source heat pump is made up of a compressor and two copper tubing coils — one inside and one outside — surrounded by aluminum fins to transfer heat. When heating, liquid refrigerant in the outside coils sucks heat from the air and evaporates it into a gas. Inside, the coils emit heat from the refrigerant as it condenses back into liquid form. For cooling, the direction of the refrigerant flow is reversed. Just plug it in and it gets the job done.

Air source heat pumps have been employed in the U.S. for decades, but until recently the technology wasn’t sufficient to use effectively in colder climates like Colorado. Now, mostly thanks to Japanese imports, heat pumps are a viable option anywhere in the country.

Heat pumps are also very efficient, delivering up to “three times more heat energy to a home than the electrical energy it consumes,” according to the U.S. Department of Energy, since it just moves heat around rather than generating it from a fuel.

Having installed a few heads throughout his home, he enjoys the room-to-room control. He’s also pleased with how it draws less humidity out of the air compared to forced air, a bonus during Colorado arid winters.

But if heat pumps are so great, then why doesn’t everyone have them? As with many environmentally friendly energy alternatives, cost is a major barrier.

For his two Mitsubishi units, totaling 48,000 BTUs, Williamson dropped $15,000 (though there are cheaper models on the market). Granted, he’s got more capacity than he needs since he doesn’t heat his two extra bedrooms. However, if he wanted to heat his entire house with the same model, he’d need to spend another $8-9,000.

On the other hand, his electricity bills are almost half of what they were with baseboard heating, and that’s keeping his house at 72 degrees all the time. What’s more, he cools his place for as low as $40 per month over the summer.

As environmentally beneficial as heat pumps are, there aren’t many government incentives for purchasing and installing them, though the federal government offers a $300 Energy Star tax credit while Boulder County provides a $250 rebate.

And it’s unclear whether subsidies will increase any time soon, as pushing for heat pumps isn’t on the agenda of most environmental groups, few of which even acknowledge this alternative to fossil fuels and wood heating. Surprisingly, a search for “heat pumps” on the 350.org website, the world’s leading climate advocacy organization and a strong opponent of fracking, doesn’t bring up a single result.

As long as natural gas prices remain low, few Coloradans are likely to transition away from the controversial fossil fuel in favor of the cleaner, but pricier heat pumps.

“If natural gas were to get a lot more expensive, then [heat pumps] would look a lot more appealing,” Williamson says. “But then your electricity prices would increase as well.”

Which brings us to the mastodon in the room when it comes to heat pumps… reliance on an electric grid, which in Colorado runs primarily on fossil fuels: 66 percent coal and 17 percent natural gas, to be exact.

In fact, Williamson wonders whether running his heat pumps on electricity generated from a fossil fuels plant — such as Xcel Energy’s natural gas-burning Cherokee Generating Station outside of Denver — may actually be more wasteful due to the energy lost at the facility and through transmission lines compared to simply combusting the gas at home at 95 percent efficiency.

One way around this quandary is to install solar photovoltaics to generate the electricity you need to run the heat pump. However, Williamson’s back-of-the-envelope calculation determined he’d need to spend another $30,000 to do so.

Even then, heat pumps wouldn’t be entirely off the hook thanks to the refrigerant, known as R-410A, which contains fluorine. While it won’t deplete the ozone the way earlier forms of refrigerants have done, the EPA calls fluorinated gases “the most potent and longest lasting type of greenhouse gases emitted by human activities.”

With all of these factors in mind, selecting the greenest way to heat your home is a bit like picking your poison. Maybe President Jimmy Carter was right 40 years ago when he advised the nation to just turn down the thermostat and put on a sweater.