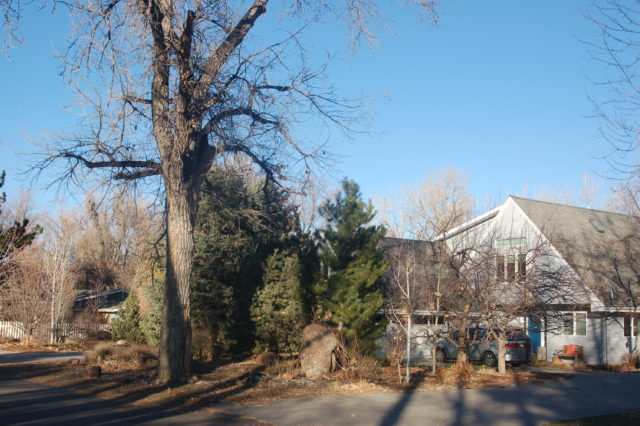 Lavender and lilacs — what Alice Hartman dreams of planting in her backyard next spring. Lavender, fresh and soothing; lilacs, ornamental and sweet-smelling. The former requires no watering; and the latter, about two inches of water per plant every two weeks.

Standing on the porch in her backyard, she points to a row of wood planks that sit across the lawn. “I added those boxes there when we moved in,” she says, tucking a strand of brown shoulder-length hair behind her ear. In the summertime, she’ll use them to grow a few veggies and flowers for the family.

In between the boxes and the porch, there’s a slackline wound tight between two Green Ash trees, and a Maple sapling a few yards back. On the porch, two cats — Fred and George — gingerly step between potted plants. Then, of course, there’s the block of green grass, which spans about a quarter of an acre.

“I hand water everything,” Alice says. “Every three or four days, especially the Maple.”

But the lawn? “Actually, I didn’t water it all summer,” she says, raising her shoulders and tucking her chin, as though shamefully shirking an American civic duty.

She might as well have been. Robust lawns have practically defined the American urban landscape for the past century; so much so, a NASA-funded study recently found “potentially [over 40.5 million acres] of land are cultivated with some form of lawn in the continental United States.”

That’s about 2 percent of American land (pavement only covers 1.5 percent), an area roughly the size of Colorado and three times larger than any other irrigated crop.

If Alice were to have watered her lawn, calculates Natalie Antonucci, the senior manager of Boulder’s Center for ReSource Conservation’s (CRC) Water Programs, the quarter acre would’ve consumed as much as 245,000 gallons of drinking water last summer — the amount needed to keep it “healthy over the course of one watering season.”

All together, American lawns’ thirst adds up: 20 trillion gallons, to be exact, are devoted to the green blades each year.

MaryAnn Nason, City of Boulder water conservation and outreach coordinator, says on a national level about 50 percent of household water (which is filtered and treated) goes to outdoor uses (watering lawns, growing gardens), while the other half goes to indoor uses (flushing toilets, washing dishes).

“In Boulder,” Nason says proudly, “we are actually 40 percent outdoor and 60 percent indoor with our total water use.” 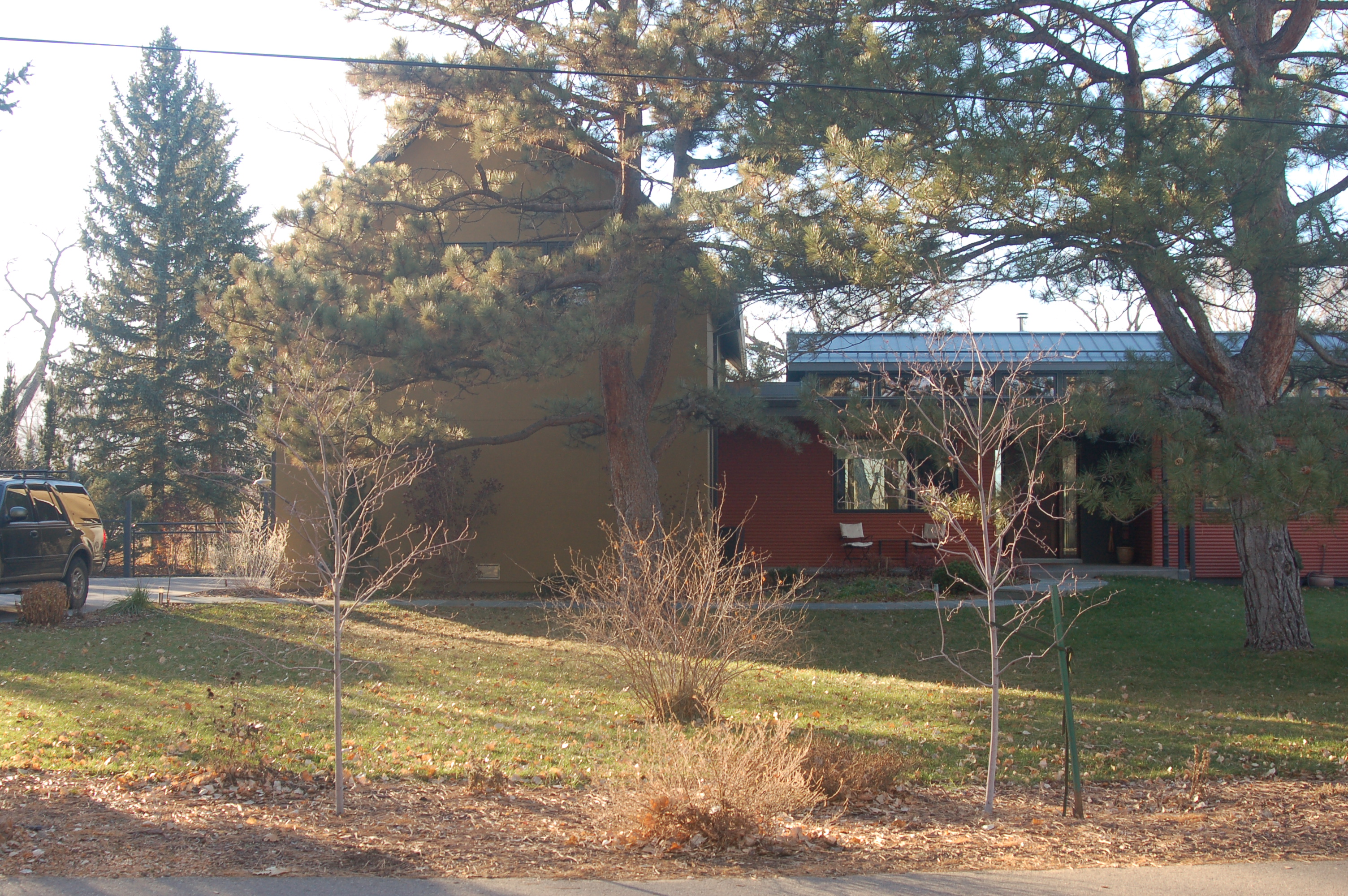 The eyebrow-raising amount of water devoted to domestic landscapes isn’t lost on Antonucci, who made it her life’s work to help reduce residential water usage. “[Lawns syphon] a substantial portion of water, especially when you consider many people have lawns they don’t even walk on.”

How much water a household uses outdoors is heavily influenced by how much it rains. Boulder, according to U.S. Climate Data, sees about 14.72 inches of rain between April and October. Kentucky Bluegrass, Colorado’s most popular grass (despite the fact that it is a non-native plant), requires about 25 inches to stay healthy over just the summer season.

So, if you’re looking for the picture-perfect swath of green to cover your Boulder yard, it’ll cost you water. This can add an additional $2,000 to your water bill each year.

In front of Alice’s house, there’s not a single blade of grass. Instead, a large cottonwood dominates the scene, its dried leaves cover the dirt ground; small shrubs frame the the driveway. Not a drop of City water has touched the front yard.

“Maybe the cottonwood suffered a little bit [without extra water] this summer,” she admits. Designing landscapes that thrive without additional water, known as xeriscaping, has been a primary tactic in outdoor water reduction, all the while maintaining an aesthetic appeal.

Antonucci explains, “Xeriscape gardens can use up to 60 percent less water than a turf lawn” by planting native and low-water plants that require little more than what an area’s rainfall can provide. They’re becoming increasingly popular around Boulder. Garden in a Box, a program Antonucci oversees and which Boulder’s Water Utilities Division subsidizes, provides a xeriscape garden for homeowners. In 2017, “we converted nearly 1,500 more lawns [into xeriscapes] than last year,” she says. 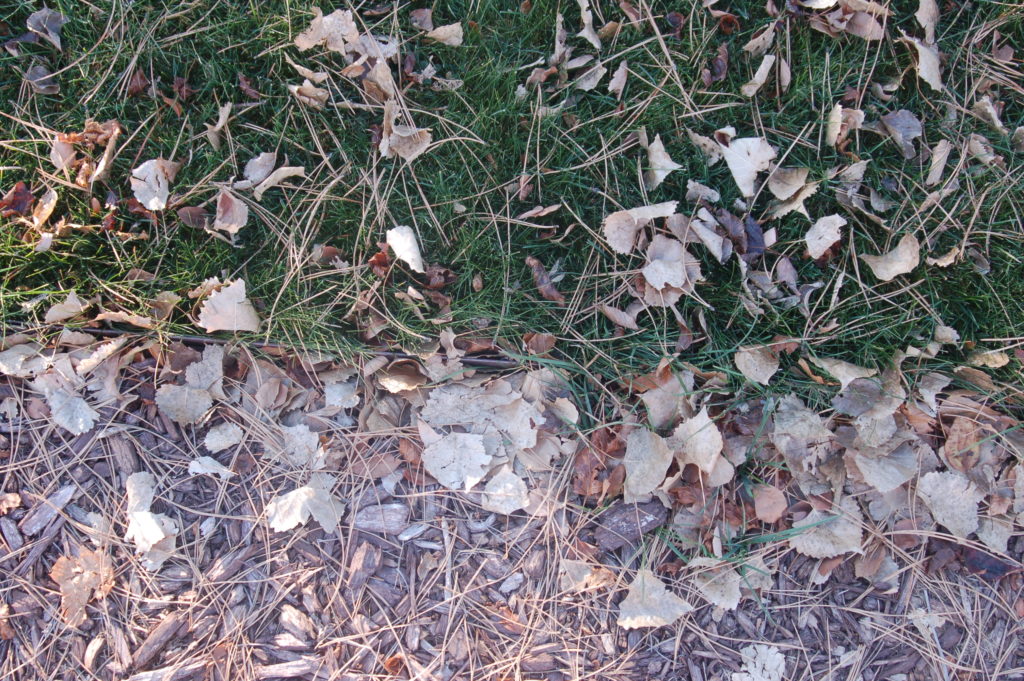 Over the past decade, Garden in a Box has provided 4,789 xeriscapes around the Front Range, totalling a potential savings of 3.4 million gallons of water.

The normalization of non-lawn yards has been the largest hurdle in her mission to promote water-saving alternatives, says Antonucci. Lawns have long signified an elevated status in Western society. (A house with a lawn could afford to shop at the market; a house with a farm had to grow their own food.)

“By 2020 we want to have conserved 1 billion gallons of water through our programs,” Antonucci says. “And we’re on track for that.”

The City, too, has goals for outdoor water reduction and is developing a turf replacement program that might roll out next year. “We will essentially give [residents and businesses] a free xeriscape garden as long as customers prove they [will replace] their turf for the garden,” explains Nason. “Our current Water Conservation Goal is a 20 percent reduction in overall per capita water demand by buildout (currently 2080), but we continuously monitor our water demand and supply trends and plan to adjust that goal if needed.”

While there isn’t a pressing need for drastic conservative approaches today, says Kim Hutton, a City of Boulder water resource engineer, reducing water use is still a practice everyone should perform. “The current [water] usage and projections for usage are all within a volume that we predict that we can supply in the future in accordance with our water supply policy, although we will continue to monitor this as we learn more about climate change and land use changes.

“[Boulder’s water balancing act comes from] a conservation ethic rather than a concern about not having enough water supply,” Hutton says.

Xeriscaping and simply abstaining from watering grass can be a simple solution for residents, but in outdoor-loving community spaces it boils down to striking a balance between “different values — making sure that people have outdoor spaces that they enjoy, while conserving water,” says Meghan Wilson, the City of Boulder’s communication manager.

Grass, after all, is the prime setting for picnics, playing softball, throwing birthday parties or letting your dog run free.

For Alice, that balance looks like a partial lawn, a small garden and some trees in the backyard, and a xeriscape out front. During the summer, she says, the grass gets her four kids out of the house in a way that playing amongst shrubs or dirt wouldn’t do. “They love playing soccer out there; they spend a ton of time outside.”

She doesn’t want their small patch of grass to go. At the end of the day, as with most things, it’s all about balance — like lilacs and lavender.