On Wednesday, March 6, a cloud of brown haze descended upon Denver.

“Highly elevated pollution levels will continue for large sections of the northern Front Range,” the Colorado Department of Public Health and Environment (CDPHE) announced that morning in an air quality statement. For at least the next 36 hours, CDPHE advised everyone in the seven-county Denver metro region, extending from Boulder south to Castle Rock, to “reduce prolonged or heavy outdoor exertion,” as more particulate matter was in the air and the visibility was worse than standards set by the Environmental Protection Agency.

Seventy-two hours after the announcement, however, dozens of runners started gathering at the base of Granite Peak, a 8,500-foot mountain located on a private conservation easement 30 miles southwest of Denver. Peter Downing, whose family owns the property, directed the event Running Up For Air — Colorado (RUFA-CO), a mountain endurance race that was created seven years ago, in Salt Lake City, Utah, to raise awareness, money and trail-runner involvement for better air quality initiatives.

“Running is good, clean air matters and the view is worth it,” Downing said to the swarm of athletes, a mix of elite ultra-runners and casual trail fiends, all antsy at the start line. Participants had signed up for one of three endurance categories — three, six or 12 hours — with the goal to run a 3.1-ish mile loop, up 800 feet to the summit of Granite Peak and back down, as many times as possible within their allotted time.

Mike Bell, a biologist in the National Park Service’s Air Resources Division and an avid trail runner based in Golden, came to run the six-hour session. He made it six laps through what would become a snow-filled, mud-ridden, ice-pocketed loop of slush. The nasty conditions didn’t irk him, though — this day wasn’t about speed, it was about community. “I’ve been studying air quality for about 13 years now, and been trail running for about six, so [RUFA] combined these two things that I’m super passionate about,” he said. “Seeing so many other runners and people talking about air quality and raising awareness, and talking about what they can do to minimize air impact — it was awesome.”

In urban settings that abut mountain ranges, like Salt Lake City and Denver’s metro area, winter can usher in some of the worst air quality conditions of the year, as cold air can get trapped below warm air. This creates an inversion (normally, temperatures drop as you go up in elevation, not rise), and because cold air is denser than warm air, any pollutants mixed with the cold air can’t rise and disperse into the atmosphere.

On the Front Range, cold air that sweeps in from the eastern plains can get pinned down by the warmer air that comes up and over the Rockies from the Pacific Ocean. If the cold air carries many pollutants, the brown cloud appears.

It’s been a long time since air quality along the Front Range has been ideal. The American Lung Association recently gave Boulder County an F grade on its air quality “Report Card” and Denver a D, with an asterisks noting in 2018 the city was also ranked the 14th most-polluted in the country.

Most of the pollutants infiltrating the Front Range come from private vehicle and oil-and-gas emissions, according to the National Center for Atmospheric Research. To help educate and protect those living in the seven-county metro area, CDPHE enacts its Winter High Pollution Advisory Program every year between Oct. 31 and March 31, issuing daily pollution forecasts that can trigger mandatory restrictions on indoor burning, voluntary driving reductions and public health recommendations.

A few weeks before RUFA-CO, Patagonia Denver hosted trail runners and community members interested in RUFA’s mission for a night of informational presentations on how poor air quality can impact Front Range trail runners. One speaker, Taunia Hottman, an account manager at Webb Strategic Communications, the consulting firm advising the Denver metro area’s Regional Air Quality Council and one of its programs, Simple Steps for Better Air, said, “We as Coloradans are used to bright blue sunny days, but that’s really hiding the problem.”

Even when there isn’t a brown cloud, it’s important to understand many gaseous pollutants (like ozone) are invisible, she explained, and heeding CDPHE warnings is imperative, especially as air quality worsens. Ground-level ozone affects everyone and can spawn breathing difficulties, irritated eyes, reduced resistance to lung infections and colds, more asthma attacks and worsened symptoms of chronic pulmonary conditions. “On a high ozone day, you really need to go inside and protect yourself,” Hottman said.

Lauren Merideth, another consultant speaking at the Patagonia event, told the crowd to think of ozone damage “like a sunburn — it’s a scar on your lungs that won’t heal [if you continue to exercise outside], just like your skin can’t heal if you’re exposing it all day, every day.”

She added, “Don’t think for a second that this isn’t affecting your ability as an athlete on the Front Range.”

Race Director Downing, who is also the co-founder and executive director of Suffer Better — a Boulder-based nonprofit that creates opportunities for outdoor athletes to give back to their communities and become voices for resource conservation — orchestrated the first RUFA-CO last year. “It was a tremendous success,” he said. “This year we tripled our participants, and could have quadrupled them but we just didn’t have the capacity.”

Colorado is the first location outside Utah to host a RUFA event, and nearly $6,000 was raised this year, all of which was donated to Protect Our Winters (POW), a climate advocacy group for the winter sports community, and Breathe Utah.

At the outset, running is, more or less, an individualistic sport — you need no partners or much more than a pair of shoes to trail run. But any runner who’s participated in a race or a group run will tell you of the alchemy two runners experience when they hit the same stride. When together, the whole running experience can be more powerful, more fun and faster.

A parallel exists in environmental advocacy: Individuals are capable of reducing the impacts of their lifestyles and starting conversations about the importance of air quality, but when individual efforts and voices come together, greater, faster and more powerful change can be effected through city- and state-level policy and public standards.

“What made Saturday so special was not only doing this hard thing, but doing it together. In giving community direction, it seemed like it became a greater mission,” Bells, the biologist, said.

After the first loop, professional ultra-runner and Boulder resident Clare Gallagher peeled off a layer, commenting to the rest of the runners eating snacks and refilling water bottles: “The AQI (Air Quality Index) isn’t so bad today,” adding, with a sarcastic drawl, “‘T’ God!”

Gallagher regularly uses her social media and public speaking platforms in conjunction with sponsorship opportunities (Patagonia is her main sponsor and she’s an ambassador for POW) to communicate the importance of climate activism and showcase the political channels that trail runners or any private citizen can use. Her Instagram is riddled with how-to instructions on contacting elected officials and information about current climate change mitigation legislation. 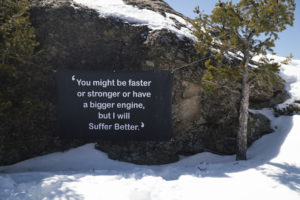 “Running extrapolated and compounded by love for the earth,” she said at the Patagonia Denver event. “Five hundred years from now, I want other trail runners to experience what we get to experience today,” she said. “That’s why POW is so important.”

Collectively, RUFA-CO runners ran more than 1,550 miles and climbed over 345,000 vertical feet throughout the day. Even with soggy socks, mud-sprayed backs and frozen fingers, everyone was all smiles at 5 p.m., when everyone finished running at the same time.

“We have this problem, and its poor air quality and climate change,” Gallagher said. “That’s all depressing, right? What’s inspiring is that this many runners care.”