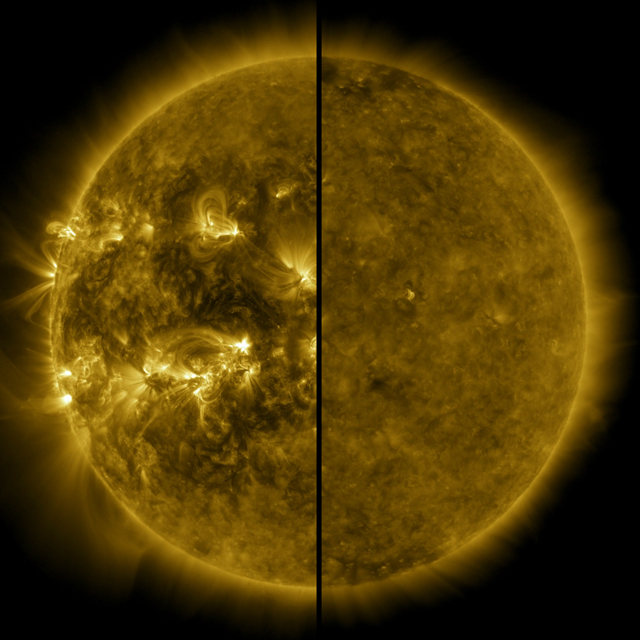 Although you might take it for granted that the sun is extremely stable over time, the star at the center of our solar system actually changes on almost every timescale imaginable. Near the surface, bubbles of hot gas larger than the state of Texas flip over in a matter of minutes, while the total brightness increases gradually over billions of years. On the timescale that matters for planning space exploration, the sun modulates its magnetic field every decade, with important consequences for technological societies.

Galileo was the first to point a telescope at the sun, revealing the dark spots that litter its surface. We now know that these “sunspots” are areas where the magnetic field is stronger, keeping the surface cooler and darker than the surroundings. Each spot is enormous, typically the size of our entire planet. If you watched the sun closely over many years, and you counted the total number of sunspots regularly, you might notice an interesting pattern. Every 11 years, the sun seems to show a few sunspots, then many more, and then fewer again. When there are only a few spots they show up in two bands, about halfway between the sun’s equator and poles. Over the course of this 11-year “solar cycle” they increase in number, migrate toward the equator, and eventually fade away.

Astronomers have carefully tracked the number of sunspots since the 1750s, and efforts to understand the physical processes that create the solar cycle have intensified during the space age. The long-term record of sunspots reveals that the strongest cycles have hundreds of spots per month at their peak, while the weakest only have dozens. The timing can also vary, with different cycles lasting between eight and 14 years. The underlying reasons for this diversity are still unclear, but it seems to depend on motions deep inside the sun that act as a sort of “conveyor belt” for magnetism. The strongest cycle in the modern record peaked in the late 1950s, and each of the past four cycles has been weaker than the last.

“We’ve had declining solar cycles for the last 40 years,” Lisa Upton, a solar physicist at Space Systems Research Corporation, says. “Is the sun dying, is it going to shut off, what’s going on?”

Upton studied at the University of Memphis and the University of Alabama before earning a doctorate in physics from Vanderbilt University in Nashville. She moved to Colorado in 2014, and after a brief stint with a Boulder software company she was awarded a prestigious postdoctoral research fellowship to work at the High Altitude Observatory. For most of the last decade, she has been developing a sophisticated computer model of the sun that attempts to reproduce and predict its magnetic cycle. Along with Doug Biesecker at the Space Weather Prediction Center (SWPC) in Boulder, Upton recently helped lead an international panel of scientists to formulate a prediction for the strength and timing of the next solar cycle.

The panel, cosponsored by NASA and NOAA, recruited experts from the U.S., Europe and Asia to evaluate a variety of forecasts over the past two years. Their goal was to come up with the best estimates of when the number of sunspots would start to increase again, when that number would peak, and how many sunspots would be visible during the month around that peak. The panel considered more than 60 different predictions, some of them based on simple correlations and others grounded in the basic physical processes that may be responsible for creating sunspots.

“Here we’ve got this star in our backyard, we’re able to study it in incredible detail, and it encompasses every aspect of physics,” Upton says.

You might wonder why NASA and NOAA are interested in predicting the next solar cycle in the first place. When the sun is magnetically active, it occasionally has violent eruptions that can spew harmful particles and radiation into the solar system. When these explosions are directed toward the Earth, it can endanger astronauts and orbiting satellites that modern society relies on for GPS and other services. Predicting this “space weather” is a challenging task, but having a forecast of the overall level of magnetism in the sun helps set expectations about the likelihood of the most extreme eruptions.

In the end, the panel concluded that the new solar cycle would begin sometime between November 2019 and October 2020, and that it would peak at about 115 sunspots in July 2025. This is about the same as the previous peak in 2012, the weakest cycle since the early 1900s. But the experts warn that even feeble cycles can be dangerous.

“Just because it’s a below-average solar cycle doesn’t mean that there is no risk of extreme space weather,” Biesecker said in a statement released by NASA. “The sun’s impact on our daily lives is real and is there. SWPC is staffed 24/7, 365 days a year because the sun is always capable of giving us something to forecast.”

In September, Upton and Biesecker paid tribute to the work of the panel, noting that continued observations had confirmed that the new solar cycle actually began in December 2019, within the predicted range. By the time of the anticipated peak in 2025, NASA plans to send astronauts back to the moon and begin building a permanent base, while SpaceX hopes to send people to Mars. With the coming magnetic season of the sun expected to be mild, the time is right for the next phase of human space exploration.