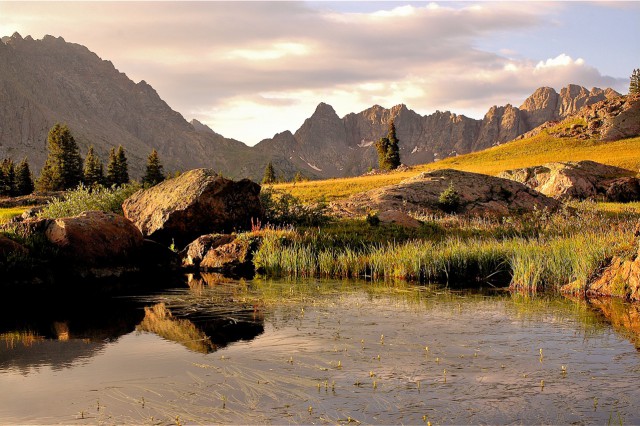 After the budget battles of the last few years, it’s clear that Congress is fiscally dysfunctional, but our elected lawmakers also face challenges in other areas — including finding the political will to support public land preservation bills that have local bipartisan support.

That includes several proposals in Colorado, where the Hermosa Creek Watershed Protection Act, the San Juan Mountains Wilderness Act and the Browns Canyon National Monument and Wilderness Act are all stalled in the fog of partisan gridlock.

Another measure, the Central Mountains Wilderness bill, covering lands in Summit and Eagle counties, hasn’t even been re-introduced this session, and Rep. Diana DeGette’s Colorado Wilderness Act, covering about 750,000 acres across the state, is also languishing.

In numerous hearings, Republican congressmen like Rob Bishop (Utah) and Doc Hastings (Washington) have publicly stated their opposition to wilderness designation and environmental protection in general. The opposition to any meaningful land preservation measures is mostly based on a visceral strain of anti-federalism that runs deep in the GOP.

But a pair of Coloradans with deep political roots are hoping to tilt the balance toward preservation with a targeted political action campaign aimed at supporting candidates who can find common ground on land preservation.

In January, former Interior Secretary Ken Salazar teamed up with conservation philanthropist Louis Bacon to launch America’s Conservation PAC. In just a couple of months, the group has raised about $200,000, according to executive director Will Shafroth, who helped establish Great Outdoors Colorado as a force for conservation in the state.

Shafroth said the new PAC will build on a tradition of bipartisan conservation efforts exemplified as long as 100 years ago, when Republicans supported passage of the Antiquities Act. That bill was supported in Congress by Shaffroth’s grandfather.

“He was concerned about the looting of Native American heritage sites in southwestern Colorado,” Shafroth says, explaining that lawmakers of both parties have been able to see the value in preserving the country’s natural and cultural heritage.

“Conserving land and cultural resources for our children and our children’s children is neither a liberal nor a conservative value. It’s not Republican or Democratic, neither an urban nor a rural idea,” says Bacon, a Republican who supported Mitt Romney in 2012. “It is so important to protect and preserve those physical places that truly define a region — however tough the fight — that we are coming together to help elected officials who support the future over the immediate.”

It’s that long-term vision that’s been lacking in Congress for the past five years. Up until mid-March, not a single wilderness bill was passed during that span, as House Republicans focused most of their efforts not just on blocking any new preservation measures, but on trying to roll back existing conservation policies.

Those attacks on the environment include repeated attempts to water down the Endangered Species Act. Last month, GOP lawmakers released a report that detailed their proposed changes to the bedrock environmental law. Among other things, the conservative lawmakers want to curtail opportunities for public involvement. The report also called for more scientific transparency, more accurate economic impact studies and safeguards for private landowners.

Republicans also made a push this session to privatize water that runs off public national forest lands with a measure that would strip the Forest Service’s ability to maintain flows for environmental purposes. H.R. 3189 originally was intended to address conflicts over water at ski areas, but extreme right-wing Republicans saw it as an opportunity for a massive water grab that could completely dry up some national forest streams.

And most recently, the GOP pushed a bill that would take away the president’s authority to declare national monuments under the Antiquities Act. None of the anti-environmental bills are likely to gain much traction in the Democrat-controlled Senate, but the tone of the legislation shows how little consensus there is on public lands management.

In the current political climate, it’s unlikely that enough lawmakers will cross party lines to enable passage of any of the proposed wilderness measures. The upcoming election also makes it less likely that Congress will act, as incumbents and candidates focus on voter bread and butter issues.

But there is some hope for the coming years, according to Tim Mahoney, a public lands advocate with the Pew Charitable Trusts. Just in the past month, a few GOP members of the House Natural Resources Committee have expressed a willingness to talk about an omnibus land bill that could include several of the proposed measures for new wilderness in Colorado.

Both the San Juan Mountains Wilderness bill and the Hermosa Creek proposal have been vetted by lawmakers from both sides of the aisle and could progress through Congress during the current session, Mahoney concluded.