From the outside looking in, there is a lot to learn from centenarians, people who live to be one hundred years old or older. It’s as if to study their behaviors is to uncover the formula for longevity, to find the proverbial fountain of youth.

According to the United Nations, the average human life expectancy is 71 years. The extra thirty years of living enjoyed by the approximately 300,000 centenarians is owed to a combination of exercise, sociability, attitude, environment and diet.

At 90 years old, Boulderite Joyce Lebra hasn’t yet reached the triple digits, but she has every intention of doing so. She says she enjoys her age and her newest book, Solo Cooking for a Sustainable Planet, encourages the specific behaviors that anthropologists and scientists agree allow for longevity.

But formulas for a long life aside, the book is also a reminder of what the aged can teach, from the inside looking out, in this case about the relationship between our health and the planet’s.

“I have seen species go extinct in my life,” Lebra says. “I grew up in Honolulu and there were always these little crabs running across and burrowing in the sand. Now they are all gone because they went extinct and that is forever. I’m glad I am my age … I hate to see the planet dying because I know that it wasn’t always this way.”

Lebra also reminisces about when she was younger, when small farmers raised cows on their natural diet of grass and people ate a lot less meat.

According to the United Nations Food and Agriculture Organization, 26 percent of the Earth’s terrestrial surface is now used for livestock grazing. And according to the Sierra Club, in the United States these animals consume 95 percent of domestic oat production and 80 percent of corn production, most of which comes from genetically modified seed grown on big ag farms.

“Industrial agriculture, especially when it comes to meat, is not good for people or the planet,” Lebra says. “This is a vegetarian/pescatarian cookbook not only because that is the diet that supports your own health, but the health of the planet as well.” 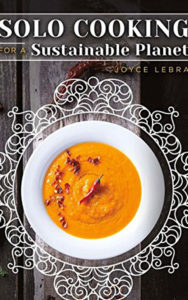 Despite this essential connection, food tends to be undervalued, both economically and culturally.

The United States Department of Agriculture reports the per capita disposable income spent on food in the U.S. has decreased from 17.5 percent in 1960 to 9.9 percent in 2013, ranking the country among the lowest spenders in the world.

Instead of being appreciated on its own terms, food tends to be valued as a commodity like corn or soybean which n are traded as a means to money, just like crude oil or silver.

The cultural side effects of the commodification of food causes consumers to buy food at the lowest price point while maximizing convenience and minimizing the amount of time and energy required to cook and eat.

From her sixth story Boulder apartment, Lebra takes this bird’s eye view of society’s culinary attitude, but it was personal relationships that motivated her to do something about it.

“I wrote the book because I had several friends who said to me things like, ‘I live alone so I don’t cook,’ as if you’re not worth cooking for if you live by yourself,” she says. “The worst remark I heard came from a doctor’s wife who said ‘I don’t care what I put in my stomach.’ That did it.

“You have to be concerned with what you eat. What you eat is connected with the environment, with sustainability.”

Even though Lebra’s current focus is on living fully, she is beginning to consider life after death and if there is such a thing as “healthy dying.” Her next book seeks to facilitate a conversation about what follows a life well lived and how cultural attitudes toward death affects those nearing the end as well as those still in the thick of life.

But for now, she hopes that her cookbook will encourage you to “venture into the kitchen for more than a glass or water or a piece of toast” — for your sake and the planet’s, too.