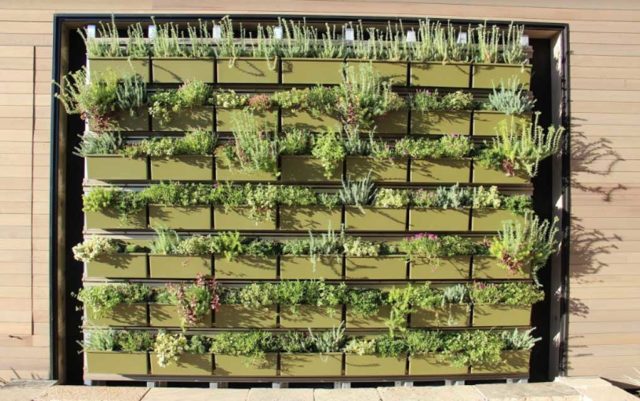 Once a day for one minute, the automatic irrigation system threaded through Peloton West condominiums’s new succulent wall whirs to life. Plants on the west-facing side are watered more frequently than it’s north-facing counterpart, due to different levels of sun exposure. But once the plants have adjusted to their new soil and living conditions, watering will dwindle to once a week, as they are highly adaptable and don’t require much water.

Able to withstand conditions without much care, succulents are a bit like the pet rocks of the plant world. As additions to coffee tales or display cases, succulents seem to be everywhere lately. The Instagram hashtag #succulove, a way for people to share pictures of their artistic succulent arrangements, has 1.1 million posts. On the Dolce & Gabbana 2016 runway, prints of cacti made their way onto suits and sweaters. Perhaps succulents are so popular because keeping them alive without much effort gives us an easily won sense of competence, or maybe they appeal to our biological appreciation of symmetry.

Outside of the Peloton condominiums in Boulder, an immense cube with two sides covered in living plants towers over passing residents. The $40,000 succulent landscaping project is there to provide an aesthetic touch of whimsy matched with environmentalism.

Finished in June, the wall is Boulder’s first in the large-scale green wall movement, a trend New Jersey-raised landscaper Travis Popiel says reached the East Coast years ago. While other green roofs and walls use perennials and grasses — including the wall at Fiddler’s Green Amphitheatre in Englewood, which features plants arranged to look like sound waves —  the living wall at Peloton uses only succulents. Decorated with a colorful mix of ice-plants, sedums and other succulents, the wall is built to withstand the Colorado dry summer heat as well as winter’s sub-freezing temperatures. The wall is ever-changing because the different types of plants in the wall bloom at different times and its colors transform throughout the day and throughout the seasons.

Even with maximum watering, in the past two months the wall has only used about 18 gallons of water — that’s about as much as is used for a 10-minute shower.

When he first moved to Boulder four years ago, Popiel says he expected to see more green roofs and living walls.

“There may be some residential things, so small-scale. But you would think in the center of Boulder there would be a big one, right in the middle of town,” says Popiel, who is in the process of getting his green roof accreditation, which requires passing a two-hour, multidisciplinary exam on green roof design, installation and maintenance.

When applied to exteriors, living walls and roofs can help regulate the temperature of buildings, an important concept in the Denver Metro area, given it has the third highest urban heat island effect in the country.

Last year, Denver passed a Green Roof Ordinance, which mandated that any building with a floorplan of 25,000 feet or more must include a roof with living vegetation, solar panels or a mixture of the two, to help mitigate rising temperatures. But no green roofs have been built under the ordinance so far. The costliness of implementing the measure raised concerns among developers and the ordinance has been under revision this year.

Popiel says cost is always an issue, but he believes the effects of the living walls can have substantial public and private benefits. In addition to regulating temperatures, living walls can improve air quality through photosynthesis and increase biodiversity in urban areas.

It’s difficult to tell when exactly succulents became so trendy, but Popiel believes that it has something to do with biophilia — the hypothesis that psychoanalyst Erich Fromm first described in 1973 as “the passionate love of life and all that is alive.” Biophilia suggests that our instinctual attraction to nature is genetic and that being around plants and flowers can make us feel connected and alive.

“It’s calming,” Popiel says. “I think the future is green, at least I hope so. With biophilia, it’s a really important psychological component to have something that you can look at and connect with.”