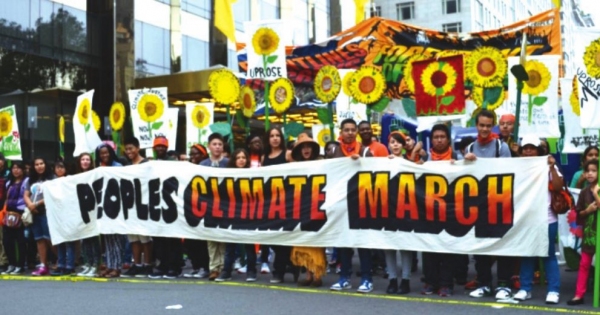 A deal struck in Lima between 196 nations on Dec. 14 leaves open the possibility of saving the planet from dangerous overheating. But its critics say the prospects of success are now slim.

The talks — which ran two days longer than scheduled — set a series of deadlines which mean that every nation is charged with producing its plans to cap and reduce emissions and adapt to climate change.

These commitments will then be assessed to see if they are enough to prevent the world heating up more than 2 degrees Celsius above pre-industrial levels, the threshold political leaders say must not be crossed in order to avoid dangerous climate change.

The Lima agreement invites all countries to set out their plans to reduce greenhouse gas emissions by March 31. The next step will be to draft a legally binding international agreement on how to get below the 2 degress Celsius threshold. This text is to be made available to all countries for comment by May 2015.

By Nov. 1 the secretariat of the United Nations Climate Change Convention is supposed to have assessed whether the commitment of these 196 nations is enough to stop the world overheating — and, if it is not, to point out by how far they will miss the target.

All this is to set the stage for a dramatic final negotiation in Paris in a year’s time, when a blueprint for a legally enforceable deal is supposed to be on the table. This is a tall order, however, because each time the parties meet, the rich and poor countries wage the same arguments over again.

The developing countries say the rich developed countries that caused the problem in the first place must make deep cuts in their emissions and pay huge sums for the poorer countries to adapt to climate change.

The rich countries say that the fast industrialization of many developing countries means that these countries must cut emissions too, otherwise the world will overheat anyway.

The poorest countries of all, and the small island states, who everyone agrees have no responsibility for the problem, want much more dramatic curbs on emissions and more money for adaptation to sea level rise and climate extremes than is likely to be forthcoming.

The talks take place amid their own jargon, with phrases like the “principle of common but differentiated responsibilities and respective capabilities, in light of different national circumstances” seen as essential to point out the difference between rich and poor nations and what they are expected to do.

The talks have dragged on for 15 years since the signing of the Kyoto Protocol, in which the rich nations agreed to the first cuts in emissions while allowing the poorer nations to continue developing.

Now that China has overtaken the U.S. as the world’s biggest polluter, and countries like Brazil and India are fast catching up, the scientific case is that every country has to curb its emissions, or else everyone faces disaster.

But whether the talks have gone far enough to allow a deal to be reached in Paris next year is a matter of many opinions.

“As a text it’s not perfect, but it includes the positions of the parties,” says Manuel Pulgar-Vidal, the Peruvian environment minister, who presided over the talks and must have been relieved he got a text on which every country was prepared to agree.

Environmental groups were scathing about the outcome. Sam Smith, chief of climate policy for World Wildlife Federation, says: “The text went from weak to weaker to weakest and it’s very weak indeed.

“Governments crucially failed to agree on specific plans to cut emissions before 2020… The science is clear that delaying action until 2020 will make it near impossible to avoid the worst impacts of climate change, yet political expediency won over scientific urgency.”

“It’s definitely watered down from what we expected,” says Alden Meyer of the Union of Concerned Scientists.

But those not keen on limiting their own development were happy.

“We got what we wanted,” Prakash Javadekar, India’s environment minister, says.

Despite the different views the talks did not break down, and so there is still hope. This assessment from Mohammed Adow, Christian Aid’s senior climate change adviser, probably accurately sums up the Lima result: “The countdown clock to Paris is now ticking. Countries had the chance to give themselves a head start on the road to Paris but instead have missed the gun and now need to play catch up.”