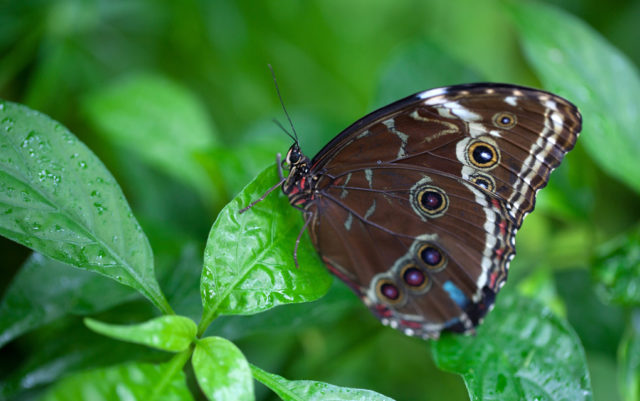 Flocks of painted lady butterflies flew to Colorado last month, in what Butterfly Pavilion CEO, Patrick Tennyson, calls an “explosion” of the pollinator species. The 70-mile-wide swarm of butterflies passed through the area during their southern migration, though Tennyson warns that pollinator species like this are in decline across the country, making his organization’s work in the region even more important.

In an effort to continue its invertebrate research, Butterfly Pavilion announced on Sept. 26 a $30 million expansion project that will move the research facility from Westminster to Broomfield and open up myriad conservation and community engagement opportunities. The new Center for Invertebrate Research and Conservation (CIRC) will include a 60,000-square-foot facility that will reside in the 900-acre North Park neighborhood, featuring parks and open space, a residential community including a town center and parking facilities, a K-20 Science, Technology, Engineering, Arts and Math (STEAM) school and more. CIRC is scheduled to open in 2021.

“The Broomfield space will fulfill a niche where we can come in and program the entire development with pollinator-friendly habitats,” Tennyson says.

At the forefront of the project is the Pollinator District, which will incorporate pollinator-friendly habitats across the entire neighborhood from obvious areas like open fields and parks to surprising spaces like medians and rooftops. Following Butterfly Pavilion’s pollinator-first mentality, landscapers and developers will ensure the health and safety of the habitats before construction starts on the rest of the site.

“We’re starting at the beginning in a way that is super innovative,” Tennyson says. “Many developers would think to incorporate the habitat space after the build, but having areas to attract wildlife was a prerequisite in our development.”

These spaces will not only grow perennial plants that produce nectar and pollen to attract pollinators, like milkweed, but will also be free from pesticides. Butterfly Pavilion plans to implement integrated pest management techniques, like habitat manipulation, as a guideline and policy in lieu of pesticide use. According to Tennyson, overuse and improper use of pesticides greatly contributes to pollinator habitat destruction around the country. Milkweed, a favorite plant of butterfly species like monarchs and painted ladies, decreased 21 percent in the United States between 1995 and 2013, according to National Geographic. Given humans’ dependency on pollination, this is detrimental.

“Pollination is vital for our survival,” Tennyson says. “On a plate of food, one third of that food comes from the process of pollination, so these insects are vital to the food we eat.”

Butterfly Pavilion has seen success in promoting the protection of pollinators because butterflies “are very well received by the public,” Tennyson says. One look at the unique markings and vibrant colors and it’s easy to see why they garner more adoration than the average bug.

But Butterfly Pavilion works with many more invertebrates besides the one for which it is named. Tennyson wants to draw attention to the many other types of pollinators that claim the Front Range as their home. In addition to butterflies, local flowering plants attract moths, many different bee species like bumblebees, honeybees and solitary bees that live separate from a colony, as well as flies and beetles. Humans are not the only ones who benefit from the work of such pollinators, and the health of local habitats depend on them.

“When the pollinators have healthy habitats, they really become the ambassadors to protecting other wildlife,” Tennyson says.

Likewise, Tennyson hopes that the Butterfly Pavilion can become an ambassador for the insects worldwide. He says the pollinator protection work at the new Broomfield center will serve as a global example of how to develop areas with pollinators in mind.

“Pollinator gardening and creating pollinator habitats are usually afterthoughts,” he says. “You’d hope for it to catch on as a global model that developers could use going forward because it would help us get in front of some of this pollinator decline quite quickly.”

But before it reaches the global scale, the pollinator practices at the Broomfield center will educate students at a planned K-20 STEAM school to be located right across the street from CIRC. While the specific educational opportunities have yet to be planned in detail, Tennyson envisions students not only learning about the pollinator-friendly habitats, but also caring for them.

“I’d love to see students participating in something like an adoption process where they would be making sure the habitats are healthy,” he says. “The hope is that they’d become stewards of this entire district and community.”

As for the current Westminster location, Tennyson says that Butterfly Pavilion must decide what to do with its land, which is home to similar pollinator habitats. Regardless of the decision, Tennyson does not anticipate problems in attracting pollinators to the new site.