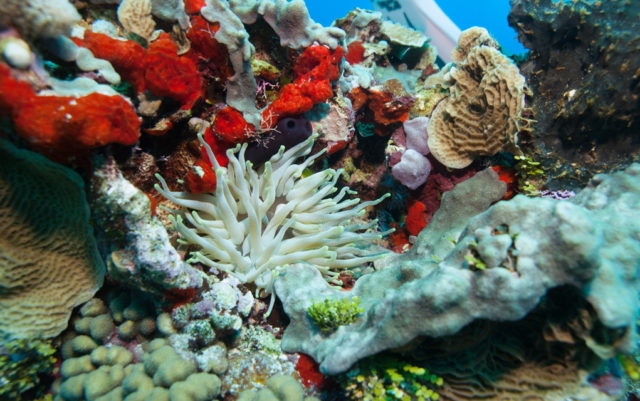 Despite being an entirely landlocked state, Colorado is home to the sixth largest population of certified scuba divers in the U.S. This may be puzzling information to non-divers, but Jonas Pologe, an avid diver from Boulder, says it makes a lot of sense.

“People in Colorado are generally very outdoorsy people,” he says. “When you want a break from the mountains, where do you go? You head to the ocean.”

Pologe and his family, despite living nowhere near a beach, have been diving together for years, traveling annually to satisfy their love of the ocean.

One day, Pologe, his wife, Irene Schauer, and their nephew, Kevin Schauer, were coming back from what they considered to be an especially fascinating dive when they heard other divers on the trip complaining about how boring the day had been since they didn’t see any sharks.

“They didn’t see anything bigger than four feet, so they had a ‘terrible’ dive,” Pologe says. He believes it’s an attitude that needs to change.

“Diving is incredible at every magnification,” he says. “The little things are just as amazing as the big things, but if you don’t know what anything’s doing or what anything is, then it’s not so amazing.”

In repsonse, the family designed a Boulder-based diving program dedicated to fostering appreciation for marine ecosystems by combining marine biology with hands-on engagement in a hybrid scuba trip.

Schauer is pursuing a PhD in marine biology, and Pologe says diving with someone who understands the reef well, and is happy to explain what’s going on,  makes everything about diving all the more enjoyable. By combining marine biology courses with scuba diving, they hope to create a unique experience that inspires people to become invested in these marine ecosystems.

“In this world, you don’t protect something you don’t know, understand and love,” Pologe says. “We’re so abusive of the environment in general. We’re killing ourselves and everything else on the planet. If people understand the reef, they come to love it and they want to protect it.”

CREWS (Coral Reef Ecology Workshop Series) was started in 2015 by Pologe with his wife and nephew in conjunction with Weaver’s Dive and Travel in Boulder.

Each year they offer a trip for certified divers, organized and planned here, but which takes place at a different coastal location. This year, the trip will take divers and scientists to Little Cayman in the Cayman Islands Aug. 11-18.

With eight 45-minute talks spread out over one week, the CREWS trip teaches its participants about all things having to do with the reef — from corals to frogfish to the shapes of fish tails. Every talk is immediately relevant to the next dive, so that participants get to see the things they learn in a lesson on land play out underwater.

“It’s amazing that people who aren’t as experienced with creatures don’t get that there’s so much more to know,” Pologe says. Since the course’s first run, it’s become clear, he says, that there is no shortage of interest in the science of the reef. In fact, one of the most presumed “boring” topics ended up being a surprise fan favorite.

“We thought that the coral class would be sort of the least appreciated, because coral just kind of looks like a rock,” Pologe says. To the contrary, the lesson on corals is the most popular of the entire course. This, he says, proves the effectiveness of a program like CREWS.

Paul Hultgren, a long-time diving companion of Pologe and his family, has been a participant of CREWS since its conception. He says that, while “environmentalism is a broad term” for the program, he does believe that many participants desire to learn more about the reef simply because they already care enough to do so.

“I’ve observed people enjoying their diving more,” Hultgren says. “There’s an appreciation that comes with learning about the reef.”

As Pologe and CREWS get ready to set out on their 2018 trip, they are constantly encouraging people to get more invested in learning about their environment.

“We’ve done talks on ocean acidification and global warming and all of those effects. Plastics in the ocean, which are an incredible disaster, causing just unspeakable damage,” Pologe says. “We’ve got a lot of work to do, but this is the way you start it.”