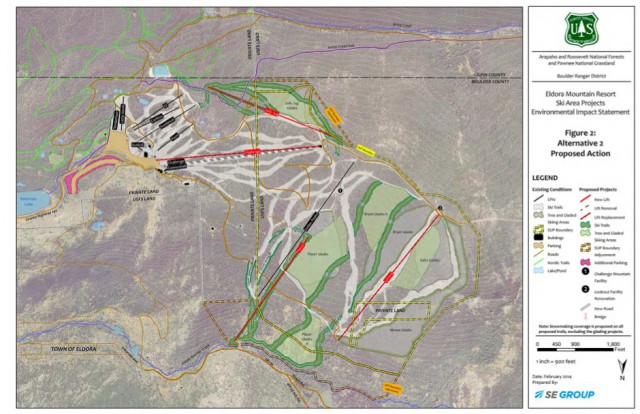 The debate over a proposed expansion at Eldora Mountain Resort could easily break down along familiar fault lines, pitting the ski industry and the U.S. Forest Service against conservation advocates and community activists over a plan that envisions adding about 15 trails across 58 acres, as well as a few new lifts and snowmaking.

Opposition has simmered since the resort first announced its plan a few years ago. It threatens to boil over again as the Forest Service takes comment on a recently released draft environmental study that compares impacts of a couple of different expansion options.

The Forest Service is hosting informational sessions on the draft study 5-8 p.m. on March 25 at the Nederland Community Center, 750 Colo. Hwy. 72, Nederland; and 5-8 p.m. on March 26 in Boulder at the West Senior Center, 909 Arapahoe Ave. Written public comments are due by mid-April. Information on comment is online at www.eldoraeis.com.

These showdowns have almost become a ritualized form of political and social theater in Colorado, at least for people who follow ski industry and public lands doings. And the mainstream press reports it that way. From Vail’s Category 3 (now Blue Sky Basin) showdown over lynx, to last year’s bitterly contested Peak 6 project at Breckenridge, the issues are similar, as the Forest Service tries to balance demographically driven demands for recreation with environmental concerns, including habitat fragmentation and degradation of water quality.

To many, it appears the Forest Service simply rubberstamps ski industry proposals. Often, concerns are voiced about the all-too-cozy relationships between the Forest Service, the ski industry and the independent contractors who compile the required environmental studies — a justified concern, according to Kevin Lynch, an assistant professor at the University of Denver’s Environmental Law Clinic. Similar criticisms have been raised with regard to the Keystone XL pipeline, as a company working on the environmental study was found to have had close ties with the oil and gas industry.

That presents at least the appearance of a conflict of interest, Lynch says, adding that each case has to be looked at individually to determine whether there is any real conflict.

These story lines often culminate with appeals to regional and national Forest Service officials, and sometimes with costly legal challenges, where positions become fixed and everyone is obsessing about legal and procedural minutiae, while forgetting about the big question: How do we manage those national forest lands in the best interest of the public?

Put another way, the proposed expansion has a high recreational value that can be expressed measurably, for example by the increase in capacity at the ski area, which translates to dollars and cents.

But the land also has less tangible environmental values attached to it that can’t be quantified as easily — the ecosystem benefits of healthy wetlands, riparian corridors and wildlife habitat. To its credit, the Forest Service does recognize and try to capture those values in plans and decisions, but it often feels like an apples to oranges comparison. Time after time in Colorado, ski area expansion projects have gone down this path, but there is a better way.

Eldora’s proposal, a relatively small project in a discrete geographic area, could become the model for a collaborative approach that focuses attention on the resources, and not the process.

There is precedent. In Breckenridge, town, county and ski industry officials hammered out a formal Memorandum of Understanding to address some of the concerns associated with the Peak 6 expansion. Similarly, the Forest Service participated in a rigorously facilitated negotiation over a proposed motorized recreation trail, eventually finding some common ground with nearby neighborhoods and towns that had bitterly opposed the plan early on.

Another example is a recently finalized deal between Denver Water and Trout Unlimited. Instead of lunging forward into an all-but-certain legal battle, the water bosses and fish lovers agreed to work together to closely monitor and mitigate the effects of new diversions from the Fraser River. If the plan works, conditions in the depleted stream will actually improve over the next few decades.

This is the key lesson for the sides lining up to do battle over the Eldora expansion plan: The Forest Service should invite environmental advocates, concerned neighbors, state and local officials and even federal environmental experts from the Environmental Protection Agency and the U.S. Army Corps of Engineers to develop an adaptive, restoration-based alternative that enables Eldora to meet growing demand, while at the same time resulting in long-term environmental improvements within the expansion area and on surrounding public and private lands.

Instead of settling for the least harmful alternative, the ski area, the Forest Service and local residents should aim high, striving for a plan with a long-term vision to actually improve the environment. If it sounds like a tall order, it is. You can see why some people prefer the lazy way, just letting the kabuki play out. But the end result of a front-loaded process would be infinitely preferable to years of legal squabbling that leave everyone frustrated.

Here’s what it would take: All parties would have to commit resources long-term to monitoring conditions on the ground, assessing impacts and developing new management actions to meet emerging issues. Boulder County already has considerable resources invested in protecting environmental assets, so it’s not hard to imagine the government partnering with the ski area to expand those efforts.

The ski area needs to — and probably does — consider the environmental sensibilities of its primary customer base and agree to a phased expansion approach. Making improvements in steps gives the monitoring program a chance to keep up and assess whether mitigation efforts are working. Approvals for subsequent expansion phases would be linked with meeting specific restoration goals.

The whole agreement needs to be wrapped up in a formal agreement like an Memorandum of Understanding and adopted as an enforceable provision in the Forest Service permit for the expansion. That makes everyone accountable and gives everyone a longterm stake in the outcome.

For its part, the Forest Service should also take seriously the Obama administration’s guidance on climate by developing a carbon-neutral version of the Eldora expansion plan that doesn’t result in any new greenhouse gas emissions. It may not be possible to immediately achieve a zero-emissions goal, but including a carbon-neutral version as a baseline would give the agency a chance to measure progress toward that goal.

Is there any way the ski area can harness some of those howling Eldora winds to generate electricity? Could Eldora help fund a long-term regional forest health program that would provide fuel for a biomass energy plant at the ski area?

Reasonable people working in a collaborative spirit with the goal of furthering the common good have achieved far more, so seeking a progressive solution to the vexing dilemma of ski area growth seems like a realistic path.