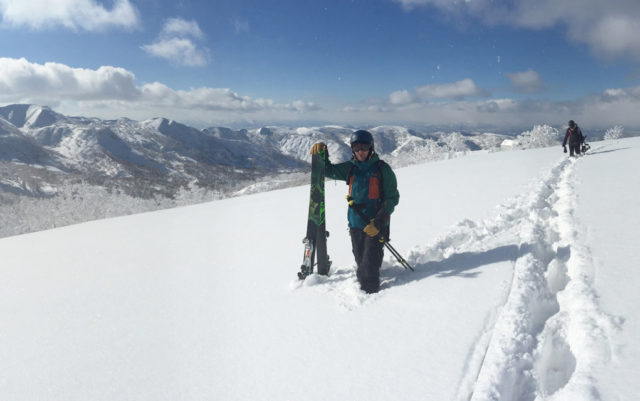 Imagine you’re a skier, a person who loves the snow and the mountains, someone who would do anything to make a life that involves adventure, snow and exotic places. Then imagine that you don’t really know that you’re that kind of person, don’t really know what you want to do with your career, and accidentally find yourself in the Andes, with nowhere to go and no friends or relations to lean on.

That’s exactly the situation University of Colorado Boulder graduate David Burg found himself in. The Arizona native had come to CU for the mountains and skiing. His goal was to study business, but he admits, “My math scores were too shitty, so they didn’t let me into the business school, but let me into the arts and sciences.” That change of plans led him to major in political science, which in turn led him to a position working as the Boulder County field coordinator for the ill-fated FasTracks initiative. His story might have ended in Washington, D.C., or down in Denver at the state Capitol, but everything changed when he moved to Argentina on a whim in 2010.

“I was always snow-obsessed,” Burg says of his move to the southern hemisphere. “I didn’t want to be a backpacker. I didn’t want to go hosteling around. Buenos Aires was where I first ended up, but I wanted to experience the culture and went to Bariloche.”

Burg says he was looking for the kind of environment that ski bums in Europe and North America take for granted, a place that had cultural and civic amenities but also proximity to the mountains. Bariloche, a small bustling city nestled on a lake 20 minutes away from the lifts of nearby Catedral Alta Patagonia ski area, one of South America’s biggest resorts, was the ideal choice.

“I went there a couple of weeks,” Burg says. “I was couch surfing and my couch surfing host was having problems with his roommate and asked me if I wanted to move in. Then about two months later, I was with an Argentinian friend of mine in a bar, who asked me if I knew about the gringos in the backcountry up at the mountain. I was looking for a season pass at Catedral, because they cost over $2,000 for the season. It turns out that the gringos were with an adventure travel company called South American Snow Sessions.”

At that time, South American Snow Sessions (SASS) was part of the burgeoning adventure travel business. The company brought snowboarders to the Andes on all-inclusive trips, showcasing the wild, exotic terrain of Catedral to powder-hungry shredders from the United States.

“I wrote an email to them,” Burg recalls. “And the guy I connected with, who is no longer with the company, also happened to be a CU grad and was the director of marketing, so I pitched him to do some online marketing in trade for a season pass and he said, ‘yes.’”

Burg admits when he was making his pitch that he knew pretty much nothing about online marketing. But, he says, he was able to learn through tutorials and other information he found on the web, teaching himself quickly so he could keep his pass and keep skiing the steep, powder-flocked slopes of one of the best ski areas in the Andes. Apparently he did a good job, because he ended up being offered a full-time position, which, in hindsight turned out to be one of the most challenging moments of his life.

“It had been a huge year, with 80 people at the camp,” says Burg, who thought that the full-time job offer was his big break. “But for reasons unknown to me, SASS was experiencing financial difficulties, and was over extended. Right after I had been hired full time, the company became insolvent.”

As the season ended in South America, Burg returned to New Hampshire, where the SASS offices were. But when the original owner of the company decided to bail to pursue other opportunities, Burg and a few other core employees were left holding the bag.

“It was myself and a few of the guys, as we were the people who were left,” recalls Burg of the moment that changed his life. “We made the decision to restart the company. One of the guys, Travis Moore (currently managing director of SASS), asked me if I knew how to start a company and if I knew how to create an LLC and run some accounting software, and I did.”

That moment was in October 2010. SASS is now seven years old, and Burg is still the “finance guy,” but he’s also a lot more: a cheerleader, trip organizer, rental gear tech and, still, at heart, the couch surfing ski bum who washed up in Bariloche years ago.

“That moment in 2010 when we restarted the company was a great opportunity for me to walk away,” Burg recalls. “Why throw myself in front of this bus? I was living on $800 bucks a month and I lived in the office. Travis got us a gym membership so we could shower and I was sleeping on the floor on a futon until our landlord discovered us living there,” he says with a laugh. “Our landlord was cool about it, but he did tell us we had to stop living there!”

“We had a lot of fun,” he adds. “We’ve come a long way. But it made sense to me through the ups and downs. I feel pretty privileged to have a job that doesn’t feel like work. That made it worth it.”

“The biggest low point in my life was restarting the company after it had hurt a lot of people,” Burg admits. “To have people not like you because of the actions of the predecessors was really tough, especially because we were trying to right a lot of wrongs.”

But, Burg says, it’s worked out in the end.

“There’s been a lot of high points,” he says. “One was in 2012 when we met some people from Aspen who owned a surf school in Puerto Rico and we were able to purchase the school. That made our business year-round and that’s when SASS Global Travel came about. It was our first successful venture into the surf world.”

Japan was another high point.

The SASS team had been working with another travel company in Japan, and finally took their first exploratory trip there with a handful of clients in 2013. That trip allowed SASS to begin offering ski trips to the Land of The Rising Sun in 2014.

“Being on the cusp of Japan’s emergence on the freeskiing scene was a very cool experience for us; from 2013 to now has been wild,” Burg says.

While he may not be rich, Burg is happy, and that’s the key to life, he says.

“None of us make the best money in this industry, but people don’t realize that there is an opportunity, if you take a risk, to have your job align with your passion. You might give up the stability of an everyday paycheck, but it’s worth it.”

He adds, “You need to make the choices to do something because you love it, and if you do that, you won’t look back. If you wake up and it feels like it is what you’re supposed to be doing, then you are doing it right.”

With itineraries that include skiing in the Andes and Japan, surfing in Puerto Rico and other exotic adventures in the works, Burg, who goes on plenty of these trips, is apparently “doing it right.”  So what other secrets can he share? Just a simple one that made all the difference for him, and which can make all the difference for you.

“If you grew up in the United States,” he says. “You have the gift of a passport that can take you all over the world. Some people can never get a visa to visit places that we can walk in the door and go to. So go explore places, it gives you a better perspective.”

Even if that perspective comes from surfing a couch in a far away land.