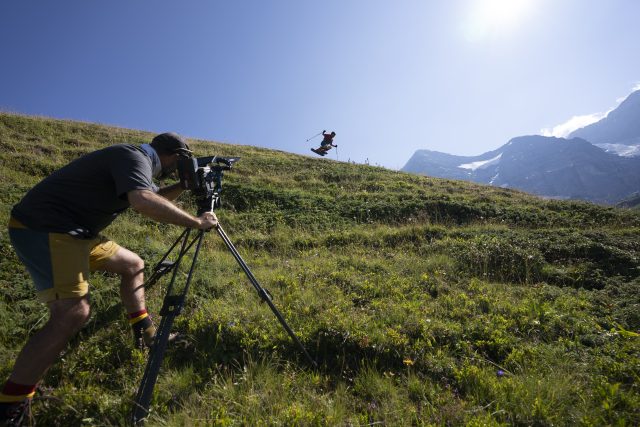 It finally happened: the first snow of the season in Boulder. Though little more than a dusting, the late-October snow heralded the beginning of ski season.

Helping to usher in the excitement for Colorado’s upcoming winter season is Daymaker, Warren Miller Entertainment’s 73rd annual ski and snowboard film. With more than 200 tour dates nationally and independently, Daymaker will make its way across 31 states, four Canadian provinces, and overseas to New Zealand, Australia, the United Kingdom and Iceland. Boulder Theater hosts a handful of screenings Nov. 10-12.

Shot in Alaska, Colorado, Idaho, Utah, Canada, Greece and Switzerland, Daymaker is a celebration of snow sports. From checking in with some of the rising stars in the skiing and snowboarding world, to examining advances in adaptive backcountry riding, following Black athletes in the National Brotherhood of Skiers and spending the day with a legendary European mountain guide, Daymaker sets out to prove “there’s no better day than one out on the hill.”

Though online streaming has become the defacto release option for many films — particularly niche subjects — Chris Patterson, director of Daymaker, believes in the power of a theatrical release.

“It’s a huge endeavor, and you’re really not doing it for the money,” he says. “You’re doing it purely just to stoke people out. I just feel like the in-theater experience is an entirely different movie than what you would see if you were just watching it on your television or your iPad.”

Patterson, who has worked with Warren Miller Entertainment for 30 years, says one of his favorite experiences from Daymaker was traveling to Switzerland to film big mountain skier Connery Lundin. Patterson says Lundin jumped at the opportunity, but Patterson had a caveat: Instead of cutting through the pristine powder of the Alps in winter, Lundin would be shredding on grass in the summer.

Invited as a method of off-season training for alpine skiers, grass skiing has become popular enough to find traction as a sport in its own right, with world championships, world cup races and national competitions now held on grass skis.

“We went to Switzerland purely for this insane landscape,” Patterson explains. “He’s hauling ass down this mountain and there are cows all over the place [and] he’s catching air and it’s stunning,” Patterson says. “It looks like a postcard.”

Despite the stoke, it was not as easy as clipping into ski bindings and shredding down a layer of fresh powder.

“It’s not like skiing at all — it’s more like riding a roller coaster,” Patterson explains. On the first day of filming, Lundin went to make a turn on a steep slope and wiped out, breaking the grass skis in the process. Lundin explained the nerves the crew felt after the first day.

“We were all scratching our heads thinking, ‘Man like we’re here for another 10 days. This might not work at all,’” he says. “I think we accomplished [what we wanted] in the end, but it definitely didn’t start out good.”

Daymaker marks Lundin’s third appearance in a Warren Miller film. The Bay-area native cut his teeth as a ski racer at the Ski Academy in Lake Tahoe until he graduated high school. Despite his plan to quit skiing and become a surf bum in Santa Barbara, Lundin decided at the last minute to attend the Leeds School of Business at CU Boulder.

“When I quit racing at 18 and moved to Boulder, skiing became fun,” Lundin says. “It was the first time I’ve ever skied without competition dictating my every move.” Through school, Lundin would frequent Arapahoe Basin, where the spring skiing reminded him of his home in Tahoe.

While Daymaker touches on important topics in snow sports, it doesn’t take itself too seriously, and that’s what Patterson thinks makes the film stand out.

“We can show them rad snow skiing in Alaska all day long and I don’t think it’ll move the needle like the fun and goofy things,” he says. “People just can’t help but go, ‘What the heck? This is so funny.’”