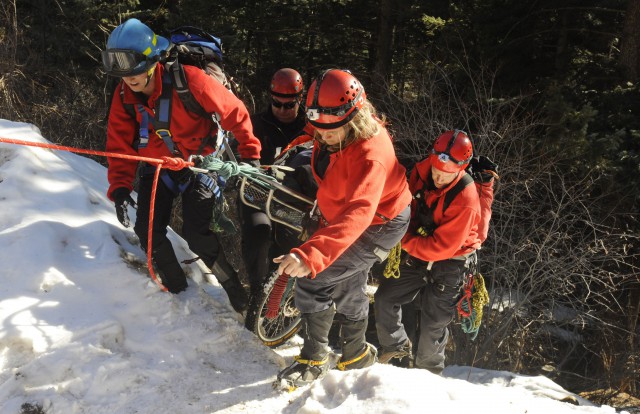 Flip through the channels of cable television on any given night, and you’ll probably find a survival-themed reality TV show. I Shouldn’t Be Alive features dramatizations of people who survived injuries or other mishaps in the wilderness. Survivorman follows the travels of a lone outdoorsman living off the land. In Man vs. Wild, Bear Grylls conducts a frontal assault on nature, eating insects and climbing down waterfalls with a camera crew in tow.

The trend is even at the movies. The film 127 Hours, about self-amputating Colorado climber Aron Ralston, was nominated for several Academy Awards.

Greg Wiggins says much of it is “hype for ratings,” but there are still nuggets of useful information in these shows. He knows a little something about the subject. He has been teaching survival classes for more than 36 years and once survived 22 days stranded by snow in the Cascade Mountains.

“You never know what can happen out there. The key is to be observant. Always know that danger is all around,” Wiggins said.

With warmer weather on the horizon, outdoors enthusiasts will soon begin venturing deeper into the wilderness. Even a short afternoon hike, rafting trip or ATV jaunt can turn into a survival situation.

Read these stories that serve as a reminder that, with the proper mindset, training and equipment, you can go into the wild prepared for any eventuality.

You might even make it onto I Shouldn’t Be Alive.

In 2007, hiker Warren Edick II learned the hard way about the biggest cause of wilderness mishaps in Colorado: a sudden change in our unpredictable weather.

A spring backpack trip on Pikes Peak turned into a search-and-rescue mission when three feet of snowfall collapsed his tent and waist-deep snow prevented him from walking out.

He didn’t bring snowshoes. The forecast called for only an inch or two on the peak.

“The fun goes into the background when you’re fighting for your survival,” Edick said.

He was able to summon help with his cell phone.

It was a change in the weather that stranded Wiggins in the Cascades. It snowed heavily, then rained on the snowpack.

“We were prepared mentally and equipment-wise. The problem was running out of food,” he said.

He and his friends survived by huddling in a U.S. Forest Service cabin, living on its stores, and then horse oats and dry dog food.

The moral: When venturing into the mountains, dress for any season.

But all the preparedness in the world can’t save you from bad luck.

Colorado Springs technical climber Craig Smith learned that the hard way in 2006 when a cliff ascent in the Black Canyon of the Gunnison turned into a life-or-death situation after he fell and broke his leg. It took 17 hours, but he and his partner pulled themselves out of the chasm.

“Several times I wanted to give up, but there was no option. I just had to get out,” he said after the ordeal.

Experts say the proper attitude — and remaining calm — is as essential as the proper gear.

Keep calm and ask yourself, “Do you know where you are?” “If you don’t know where you are or how to get out, obviously you’re going to stay put,” he said. “Staying put, in most situations, is really going to be key, unless the weather clears up or you have a good idea where to get out.”

You could be moving away from rescuers and wasting precious calories if you don’t know where you’re going.

A Colorado Springs woman learned that lesson in 2005 when she lost her friends while mushroom hunting on Greenhorn Mountain southwest of Pueblo. Rose Ann Nardini-Hausman walked in the direction she thought she had left her car, but only got more lost. After a cold night along a creek, she sprained her ankle and spent two more nights in the wilderness. She wrote “SOS” in rocks, held her red sack in the air and kept calling for help. Finally, a rescue crew found her.

After her rescue, she said keeping a positive mental outlook kept her going.

“I told myself, ‘You’ve got to stay in your head. If you give in to your emotions, you’re really going to be in trouble,’” she said.

In 1998, two people on a winter hike around Rampart Reservoir tried to take a shortcut to their car as dusk approached. They got lost and spent 40 hours struggling through blizzard-like conditions and waist-deep snow without food.

“I was totally underdressed,” Benjamin Shaw said. “I wasn’t too prepared at all.”

But Shaw and his hiking companion had a lighter, and campfires kept them alive until the weather cleared and they could walk to find help. They took shelter beneath a rock overhang.

Fires and shelters are two keys to survival, and Reg Francklyn, president of El Paso County Search and Rescue, said anyone venturing into the wilderness should have the ability to make both, even if your shelter is just an emergency poncho.

Other essentials he recommends are a knife or other tool, first aid equipment, extra clothes, water filter or purifier, map, compass, water and food.

But too often, he said, people have nothing more than their cell phone, which is an unreliable tool in the high country.

“There’s an over-reliance on technology,” he said. “Yes, a cell phone is wonderful, and we recommend people have them, but that shouldn’t be your only piece of equipment.”

Still, the best way to survive is to avoid a survival situation. Most are the fault of people who ignore warning signs — changing weather, unfamiliar terrain — and plunge on. It’s also known as “summit fever.”

“They’re just not stopping to think of the consequences,” Francklyn said.

STAY ALIVE OUT THERE

•
Even on day hikes, take a first aid kit, emergency shelter (even a
poncho), a water filter or purifier, map, compass and a knife or other
tool.

• If lost, stay put. • If you can’t call for help, signal rescuers with a fire, bright clothes or a mirror.