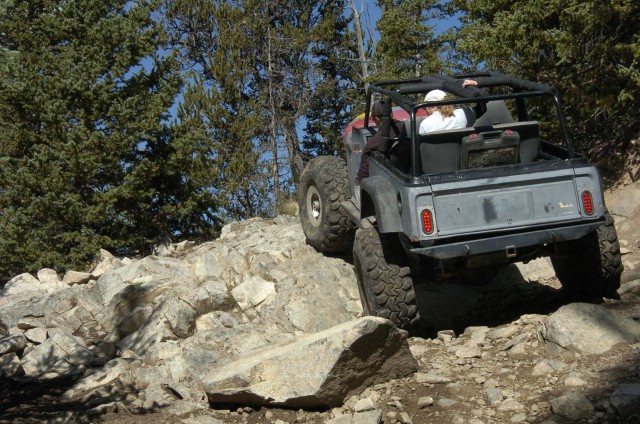 Sorry, guys, just a little rock in the road there.”

The “rock,” a German shepherd-size boulder, jarred us, but it was otherwise no match for Jess Caton’s hand-built, heavily modified Jeep. The road is one of the worst — or best, depending on your interest in rock crawling — in Colorado, the often-loathed, sometimes-controversial forest track known as Lake Como Road.

It is the launching point for climbs of Sangre de Cristo fourteeners Blanca and Little Bear peaks and Ellingwood Point, and vehicles are allowed high in the basin. But few drive here.

Spend two hours creeping seven miles up, over rock walls and through talus fields, and you’ll see why. It’s a perilous, technical drive known for shredding stock trucks and SUVs and challenging the skills of the hardiest Jeepers. In the 12 years Caton has been a search-and-rescue volunteer, as many people — four — have died in road accidents as have died climbing the peaks above, he said.

“It’s perilous, even to walk on it,” said Donna Mabry, president of Alamosa Volunteer Search and Rescue. “It’s a hoof- and it’s an ankle-twister, just walking it. It’s like walking in an empty creek bed.”

“You have to have some nerves of steel to drive that,” she said.

“I’ve never seen a worse road than that. It was hard to believe that vehicles can go up over some of that stuff. It’s pretty impressive what they can do,” said Joe Lavorini, program director for the Colorado Springs-based Rocky Mountain Field Institute, which spent 37 days building trails above Lake Como over the summer.

Only about two groups of vehicles a week made it all the way up during that time.

A comment frequently posted on mountaineering websites: “I hate that road.”

We camped in the desert of the San Luis Valley, so low the sagebrush had yet to give way to chest-high junipers.

That’s as far as passenger cars dare go on this road.

High-clearance vehicles can go an additional three miles or so, depending on the driver’s skills and nerves, before the road gets, says the guide at website 14ers.com, “nasty.” But that gets drivers to only 9,000 feet, which means a long, steep and usually hot hike for peakbaggers.

Take a video tour of a drive up this road.

The main threats are four obstacles known as “Jaws 1-4,” boulder-strewn stretches where even the high clearance and short wheel base of Jeeps aren’t enough. At other points, steep dropoffs remind you of the consequence of a misplaced tire.

What maintenance occurs is usually done by four-wheel-drive clubs, whose members cherish Lake Como Road as much as some hikers loathe it. They work not to make it easier, but to keep it challenging.

“I don’t see any point, from any standpoint, to grading the road,” said Jim Bailey, of Alamosa, who drives it several times each summer. “The hikers don’t want anybody on it. The Jeepers want the difficulty of the road maintained, and the way our government’s going right now, where would you get the money for such a project?” But the U.S. Forest Service has not always had such a hands-off approach.

In the mid-1990s, the Forest Service considered closing the road because of erosion, trash and other concerns.

Alamosa County officials were deluged with phone calls and letters urging them to adopt the road to keep it open.

Darius Allen, a county commissioner then and now, took a ride up with a four-wheel-drive club and was impressed by all the hard work volunteers had done to minimize erosion on the road and to keep the area around the lake clean. County officials asked the Forest Service not to close the road.

“It’s pretty well-known from all over, and I thought it was kind of a feather in our cap to keep it open for four-wheel-drive vehicles,” Allen said.

Said Bailey, “On any weekend, if you drive by the motels in this town, you will see the people in their four-wheel drives to go up there.”

The Forest Service backed down, and the road remains open its entire length. Allen said he does not recall any calls urging closure of the road.

There’s a certain amount of machismo that goes with four-wheeling, and Caton has seen plenty of people in hot water.

“I’ve seen a lot of people come up here in stock vehicles pushing it beyond the limits, and that’s when they get into trouble,” he said.

A mechanic, Caton built his modified Jeep. Practically every time he drives the road, he helps out a driver. He has winched vehicles upright and towed them down the mountain. He has seen vehicles that have rolled and killed their drivers.

Helping drivers is part of what he enjoys about the road, though it is also crucial for rescuing climbers hurt on the peaks, especially Little Bear, regarded as one of the most difficult fourteeners in Colorado.

Beyond that, it’s the scenery, the great camping and the challenge of the road that keeps him coming back.

Riding with Caton is nerve-racking yet thrilling. To see the massive, balloon-like tires roll up and over boulders, while the vehicle is nearly vertical, is a shock to the senses for one who has spent a lifetime driving on pavement.

After a short time at the lake, we headed back down the road, which is just as painstaking and jarring as riding up. About halfway down, a high screech emerged from the Jeep.

“That’s a new sound,” Caton remarked, stopping to check under the hood. A bolt on an engine mount had come loose, nothing too serious.

You don’t have to be a mechanic to tackle Lake Como Road, but it helps.