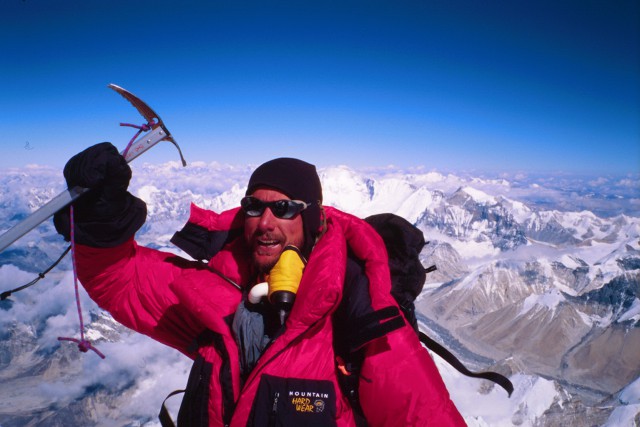 Ryan Waters is crossing through a wet valley high in central Nepal, en route to his next objective — climbing Dhaulagiri, the world’s seventh-highest peak. Between five-minute intervals on his satellite phone, Waters talked with Boulder Weekly about his record-setting Antarctic crossing with his Norwegian expedition partner Cecelie Skog, shared how he manages a local career as director of Mountain Professionals LLC and teased a glimpse of which direction he’s heading next. Things are looking up.

Waters talks about this season’s challenge with the familiarity and perspective of a pro walking off the links at the Masters. He’s not priming a fairway shot or reading the green, but his view shares the absorption of technical details and evaluation of risk often seen with top-tier performers in their field. To summit the Dhaulagiri massif (Dhaulagiri I rises to 26,795 feet above sea level), climbers will capitalize on a relatively small window of opportunity during April and May before monsoon season sets in during the first week of June.

This week, Waters, again teamed with Skog, will launch his six-day trek to the Dhaulagiri base camp and begin moving gear and setting fixed lines up their route.

“We’ll start climbing pretty quick,” Waters says. “It’ll take a couple weeks to climb the route and carry stuff up to higher camps. We’ll probably have three camps above base. A little bit of up and down. And then hopefully sometime mid-May, if the weather turns out to be good, that will be the time where we hope to do a summit attempt.”

Originally from Atlanta, Waters’ career as a professional mountain guide started with joining Boulder’s rock gyms and immersing himself in the local climbing communities. Once tapped in to the local pulse of climbing, his progression led to a professional career as a tenured mountain guide. Waters’ direction and experience steered him towards the Andes, where he worked as a Patagonia Outward Bound instructor. He marched on to lead 12 expeditions to the Himalayan mountains, including Cho Oyu, K2, Broad Peak, Gasherbrum II, Lhotse, Manaslu, the Southeast Ridge of Pumo Ri and three trips to Mt. Everest, tackling routes from both Nepal and Tibet.

Eleven years of professional guiding and outdoor development took Waters to some of the coldest and tallest places on earth.

Another step forward would bring Waters to some of the furthest reaches of winter extremes: Waters expanded his scope of expeditions to the polar theatre.

The change in scenery from familiar glaciated precipices to likewise cold and austere, but flat, polar deserts was a welcome change, he says. He and Skog planned the first unassisted and unsupported ski traverse of Antarctica and set the record in 78 days.

When he tells the story to a crowd, Waters demonstrates the size and scale of their trip with the Landsat Image Mosaic of Antarctica, developed by NASA. The United States fits neatly within the swath of Antarctica, and there’s even enough room left over to add an area the size of Mexico. Needless to say, it’s big.

Starting from Burkner Island, Waters and Skog cross-country skied, hauling 300-pound expedition sleds, to the South Pole and returned via the Ross Ice Shelf. Through the trip, the two teammates shushed over 1,117 miles of crusty, sastrugi snow, navigated little-known passes through the Pensacola Mountains and, for a strong finish, topped off the expedition with an 18-hour push through a maze of crevasses called the Devil’s Dance Floor.

Taking a rest day during the holidays, Waters and Skog celebrated by opening presents under a Christmas tree drawn with black marker on the inside of their tent wall. Soon after, they were back to nine-hour days skiing in temperatures that made it too cold to stop.

Off the ice shelves, Waters balances management of the locally owned and operated Mountain Professionals.

Long distance trips with limited channels for communication can often put strain on teams and an organization. Waters vouches for Mountain Professionals’ fluid work and support for smooth transitions.

“They’re all senior guides, so they don’t need a lot of management,” he says. “They can pretty much run the trips how they have for a long time. It’s pretty seamless, actually.”

“It just takes a lot of planning,” he says. “I can receive email on satellite phone, and I can call into the office. What I do is a lot of upfront work when I know I’m going to be gone.”

Expeditions through Antarctica on skis and new vertical challenges in Nepal are keeping the alpine fresh for Waters. Still, he says “there’s always plans for a North Pole trip sometime.” But for Waters, Skog and their team, they might need a bigger frozen continent.