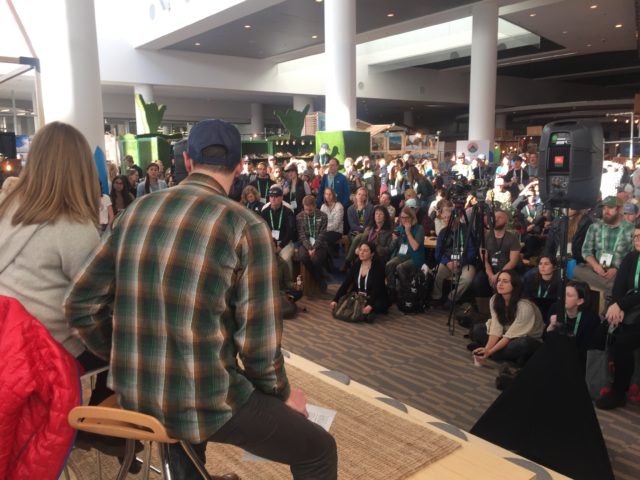 When you stand in a building with 20,000 bustling people, the energy is palpable — like watching beer bubbles gently fizz in a glass.

During a break in the second day of Colorado’s first Outdoor Retailer + Snow Show (OR), I stood on a balcony overlooking the multi-billion-dollar trade show. Altogether, there were actually more than 29,000 of us in Denver, scattered between the Colorado Convention Center and two hotels down the block.

People traveled from 60 countries to walk among the thousand-or-so booths showcasing next season’s newest products, all structured in a tight grid across the Convention Center’s floors. Over the five days of the largest U.S. trade show for outdoor and winter sports industries, they met with prospective clients or partners, initiated trade deals, collaborated on projects, drank beer and reconnected with old friends.

From the balcony’s vantage point, I watched people scurry between the booths below me — some so elaborately constructed a family of four could live comfortably inside. Banners and logo-ed flags obscured the steel roof. Outerwear company Canada Goose displayed their clothing in a multi-tiered, closed-off platform; a receptionist’s podium and suited man standing guard. The North Face arranged picnic tables with phone chargers around an erect Antarctic expedition tent and Jimmy Chin and Conrad Anker’s used gear.

Most people I saw from the balcony carried backpacks and cradled cell phones in their hands; most were white, wearing plaid, their bodies slight variations of the athletic build you’d expect outdoor industry representatives to have.

Up until this year, the bi-annual OR had spent the last two decades in Salt Lake City’s Salt Palace Convention Center. But after the outdoor industry unsuccessfully lobbied against the Utah government officials supporting Secretary of the Interior Ryan Zinke’s review of public lands (and his eventual decision to reduce Bears Ears National Monument), the Outdoor Industry Alliance (OIA) put forth a statement they knew would catch economic-driven government officials’ attention: The trade show, and its $110-million annual economic impact, would look elsewhere for a home.

Denver, it seems, was an obvious choice as the trade show’s next location — it has a reliable international airport, public transportation, and a unique assemblage of restaurants and lodging. More importantly, however, is how Colorado reflects and upholds what Utah lacked. “Ultimately when deciding on our final venue, the ethos of Colorado just aligned really well with our industry and its vision and values,” Marisa Nicholson, OR’s director, said in a statement shortly following the early 2017 announcement.

At the trade show’s opening breakfast, Gov. John Hickenlooper declared, “Colorado will do everything in its power to support the industry.”

All things considered, the move signals a new, crucial chapter in the outdoor industry. The OIA now has to decide how to best arrange its upcoming plot. Will it continue as it’s been, white and plaid-clad? Or take cues from the new, eco-conscious and socially aware voices knocking at the door? The truth is many factors are pulling the industry’s priorities in different directions, and it isn’t easy to juggle them all: Climate change is threatening the sheer existence of many winter sports; politicians are minimizing the value of public lands; social movements are bringing diversity issues into the limelight; and indigenous voices are being heard, seemingly for the first time. How will the industry be best supported, and how will the industry best support the people and planet upon which it relies? 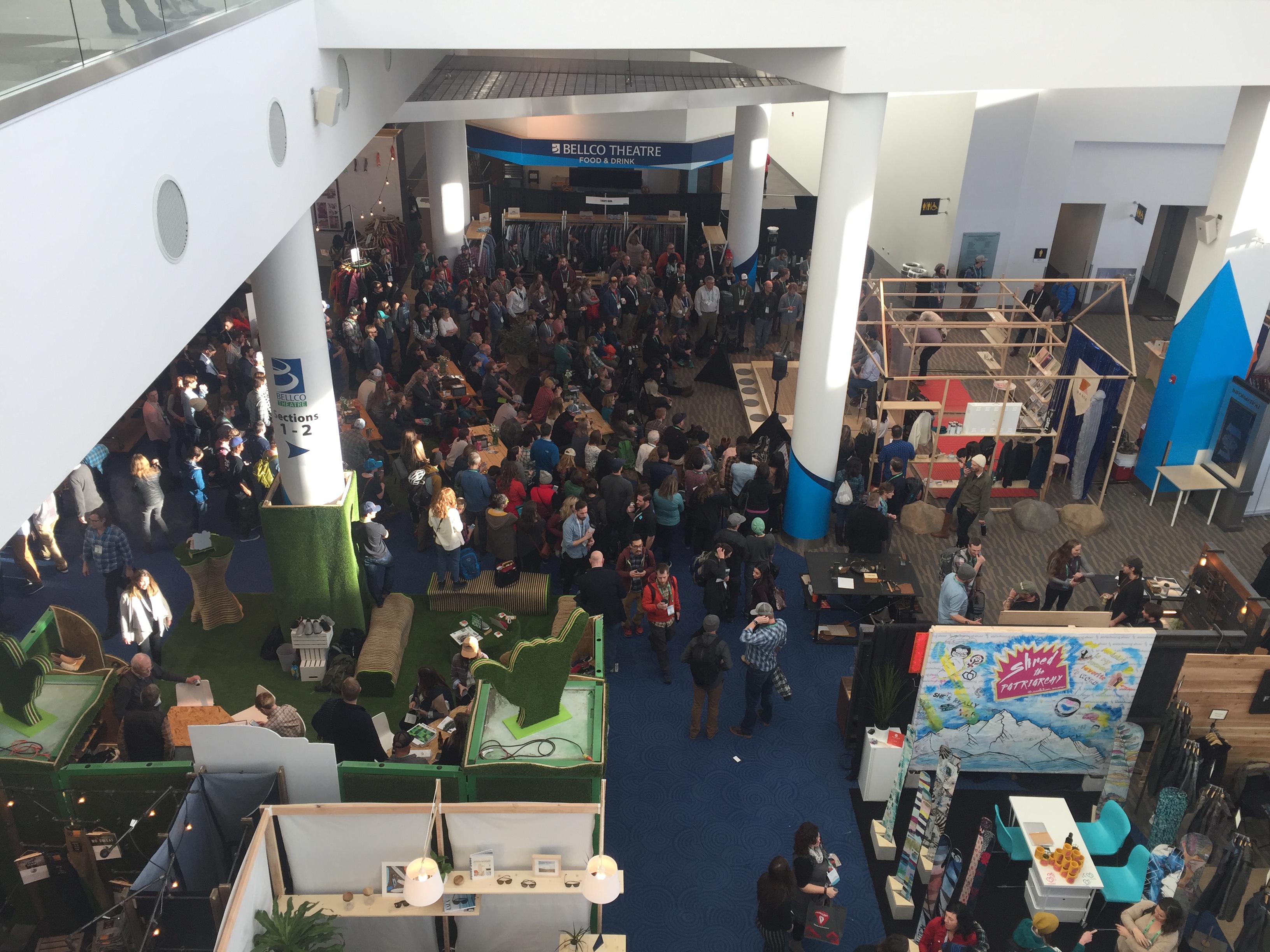 At its core, OR has become more than gear-ogling and business negotiations. What they call “activation areas” are scattered around the convention center as communal places to host panels, seminars and discussions about the state of the outdoor industry. If the event topics are any indication of the industry’s priorities, it’s safe to say they are trying to tackle some big issues — climate change, politics, diversity and indigenous inclusion — leveraging the industry’s wide reach and collective $887 billion bargaining power to take steps toward building a better future for the planet and its people.

Climate change was an obvious thread laced throughout the show; nearly every panel addressed its impending effects on the industry, and everyone I talked to was forthcoming about their environmental shortcomings and eager to discuss how they were working to mend their issues

The trade show’s keynote speaker, Paul Hawken — a nationally recognized environmentalist and editor of Drawdown — The Most Comprehensive Plan Ever Proposed to Reverse Global Warming — called upon the industry to involve itself in climate solutions: “Taking responsibility is not a burden,” he says of the industry’s position as mediator between the land and the people who use it. “It’s a gift.”

OIA’s push toward bipartisanship reverberated at the lunch presentation, “State of the Rockies and Conservation in the West: A Discussion of Bipartisan Issues and Opinions in the Rocky Mountain West,” where OIA’s Vice President of Government Affairs Alex Boian encouraged everyone in the audience to involve themselves in politics. “Conservation is not a red, nor a blue issue,” he said. “This administration is out of step with the West. … We have our work cut out for us.”

But unlike climate change and bipartisanship, willingness from brands and organizations to address diversity issues and acknowledge indigenous voices were not offered with such open and easy fanfare. At no time in casual conversation did anyone I speak with offer their shortcomings or provide me their exciting plans to address diversity issues or reflect understanding of indigenous opinions on outdoor recreation.

It was at the handful of panels designed for these topics that I learned the most.

On OR’s fourth day, I sat on the floor of a packed “activation area” looking up to five indigenous people on a platform. Each spoke of their experiences within the outdoor industry.

During the Q-and-A session, a woman in the audience took the microphone. “How do you feel when people, non-indigenous people, use the term ‘tribe?’” — as is common, particularly among white outdoorists.

Len Necefer, creator of NativesOutdoors, bowed his head on stage. There was a pause, as though the predominantly white audience was realizing for the first time that many of their everyday actions may be offensive to others or culturally appropriative.

“It makes me want to barf,” Len finally says, looking up. “It’s important to realize language matters. … Now that you’ve heard this, it’s your responsibility.”

Jaylyn Gough, founder of Native Womens Wilderness, then took the microphone. It’s not long before her tears convey the complex network of issues emblematized in the whitewashed outdoor industry. She explained it’s hard enough as an indigenous woman to find a place in the world, a literal tribe, and to have white people take that terminology for themselves, like they’ve done with countless other native elements… well, it hurts.

Later that day, Jaylyn sat on another panel in a different “activation area.” Each person on stage presented a tool they hope will help shape the outdoor industry’s future. Jaylyn spoke of a torch. “I feel like [I’m doing] a lot of work in the Outdoor Retailer world, and sometimes it’s a really dark path,” she says. In talking about the outdoor industry’s issues, she says, “The torch brings light upon these situations.”

This was the first time a panel of all-indigenous folk held a stage at OR in its 37-year history.

Jenn Gurecki, the panel’s moderator and CEO of the female ski company Coalition Snow, says, as if to summarize lessons learned over the trade show’s course, “You can’t be what you can’t see.”

In laying the foundation for the outdoor industry’s new chapter, OR has created space for the new members in its traditionally white community. Collaboration — the industry veterans and its new voices, Democrats and Republicans, winter and summer sports — is evident, but as I walked away from the Convention Center for the last time, I wondered how the chapter will conclude: how can the energy of thousands of people and billions of dollars best be put to use? Could the more contentious topics make a leap into OR’s casual dialogue?

But for now at least, as Jenn says with a promising tone, “Collaboration is the new competition. A rising tide lifts all boats in the industry.”