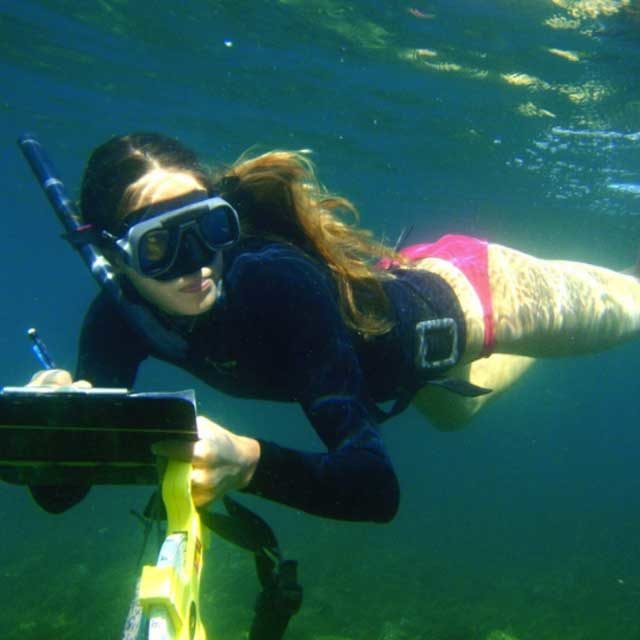 About 90 miles offshore from São Paulo, Brazil, a mile-long mountain ridge pokes out from the Atlantic Ocean. Between 2,000 and 4,000 golden lancehead vipers roam the land, which, according to the Discovery Channel, means a person is never more than 3 feet away from one of these deadly creatures at any given point on the island. A single bite can cause kidney failure, intestinal bleeding, necrosis of muscular tissue, brain hemorrhaging and, ultimately, death.

Over the past two years, Mehgan Heaney-Grier has assisted two major expeditions to the uninhabited sliver of land, which the locals call Snake Island. As part of the Discovery Channel TV show Treasure Quest: Snake Island, Heaney-Grier leads a team through technical dives and operations as they search for a legendary Incan treasure.

The 39-year-old ocean adventurer grew up in the Florida Keys, but now lives in Boulder County with her husband, son and stepdaughter.

“Really I’m an ocean baby, and I miss the ocean,” she says, and as such, she tries to split her time as much as possible between the Rocky Mountains and the Atlantic Ocean.

Heaney-Grier first entered the spotlight when she was 18. She’d recently graduated from high school and was spending all of her free time either on or under the ocean. While on a spear fishing adventure with friends, they started dabbling with basic diving techniques, like not looking down and not kicking. It was obvious Heaney-Grier was a natural. That day she dove 120 feet on a single breath.

At the time, there was no documented U.S. record for a constant weight dive — where you must swim up with any weight that you bring on the dive.

“Somewhere along the line, I decided to [go for it]. I established the record at 155 feet. Less than a year later I beat that with 165 feet.

“I fell in love with the feeling of being down there — how it makes your mind and body feel,” she says. “It’s really, really quiet, but there’s a sound that goes with it. You just hear the hum of the ocean. It’s almost like a kid plugging their ears. … You get to go inside your own mind. It ends up like a physical feeling: the squeeze of the deep blue, the biggest comforting bear hug. You can literally enter ‘inner space’ with all the silence you have, and you can feel your heart beating and you can almost hear it. It’s [here] where you get to go inside [your mind] and internalize things. It’s my meditation, a spiritual experience.”

She cemented her diving excellence by assembling and captaining the first U.S. team to attend the World Cup Free Diving Championships in Sardinia, Italy, in 1998. But then Heaney-Grier began to expand the ways in which she could use diving.

She partnered with Animal Planet to produce Extreme Contact, a TV series that showcased interactions and encounters with sharks and animals in ocean wildlife. From there she executive produced and starred in Deep Diver: Tiger Shark Odyssey, which eventually led to stunt diving for movies like Pirates of the Caribbean, Into the Blue and Touristas.

“Meanwhile, I also was incorporating modeling into my underwater work. I was keeping plenty busy, and feeling lucky to be able to do freediving for work,” she says. “I loved doing it, and it was something that I was good at, and could continue to excel at.”

Heaney-Grier enrolled at University of Colorado Boulder in 2007, studying evolutionary biology, ecology and anthropology. Now with her expedition gig on the Discovery Channel, she’s been incorporating her studies into her dive work.

“I definitely see everything through the lens of a marine conservationist,” she says. “I feel like a life-long conservationist having grown up [on the water] and seeing how things have changed over the years. … My studies and projects have gained me a wonderful understanding of how you fit in the system, how things are connected, how valuable everyone’s decisions are, and how each person can make an impact, even if it’s small. When it’s all added together, it can make a big impact.”

Heaney-Grier has also teamed up with several conservation organizations.

“Everything I do has that end game in mind — always working towards spreading the message and [making people think about] how we are connected, and how there’s so much beautiful wild adventure. It’s so important that we together make decisions that support and keep [the world] wild and green and blue and healthy. … [I’m] trying to keep the hope alive in myself, and talk with other people about it all and really trying to share experiences and connect with people. The best way to learn is from each other. More than anything I like to focus on trying to be a part of the solution.”

On the Discovery Channel show, Heaney-Grier is the only woman on the five-person expedition team.

“I’ve worked in male-dominated fields for a long time,” she reflects. “I’ve become really accustomed to being the only woman on expeditions like this, so it doesn’t stand out for me when I’m there … just another day at the office.

“The only time when I ran into a strange situation [as the only female] was on Snake Island. We were out there for days, and it’s hot and everyone is working hard, so when you finally stop to take a break, everybody uses the bathroom. And going to the bathroom on an island covered in pit vipers is a little tricky when going alone.”

After such varied professional roles, “One of the biggest things I’ve learned is how to hone my skill set to deal with and diminish any fears,” Heaney-Grier explains. “Biologically speaking, we all have a built-in ‘flight or fight’ [instinct] that keeps us alive. … But there are ways that it can be debilitating too.”

It may come as no surprise that people often ask Heaney-Grier if she ever gets scared, or, more bluntly, if she’s crazy.

“Trying to navigate around fear and take it by the reigns is one of the biggest things that’s been instrumental over the course of my career,” she says. “Having control to deal with fears and situations has definitely kept me alive and saved my hide throughout my career. When you’re in a situation that’s life threatening, and you aren’t in the moment because your mind is wrapped up in fear and not thinking rationally, dialing down the fear can keep you better focused on what’s at hand.”

Heaney-Grier acknowledges that fear is restrictive in all facets of life, “even in real life.”

“It holds us back from important conversations,” she says. “There’s such a disconnect between people when conversations aren’t happening, and that can be rooted in fear. Honestly, I’m more conformable underwater with sharks and alligators, navigating and trying to survive than having interactions and political conversations.

“But at the end of the day, I do love connecting with people. Going to the edge of your comfort zone is how you grow, and change, and take on new experiences. You just have to jump and see how you’re going to handle [a scary situation]. And that’s what I’ve been doing throughout my life and career, in some of the most dangerous and life threatening situations. I work well, literally and figuratively, under pressure.”

Heaney-Grier’s upcoming year will continue to deepen and expand her diving world.

“I have a lot of different irons in the fire, and a few adventures on the burner that I can’t talk a whole lot about now. … But things are going well in the adventure and travel department. I’m really looking forward to my son pushing 4 [years old] this year because I love sharing the adventure with him, and my stepdaughter as well, and the ocean.”

In balancing her work and family, and being landlocked in Colorado, she says, “Find what drives you and tap into that. It’s important for your happiness, and those that love and depend on you, to be happy and to wake up and be in the life you are living. For me, really figuring that out was a big deal and going back to my adventuring and knowing that that’s a driving force for me is my touch stone for everything, that wonder and being able to be out there and see what happens next.”