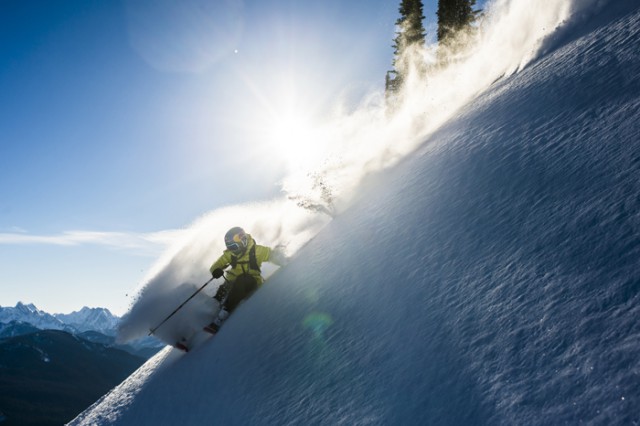 For a Coloradan, it’s a very familiar sight: skiers perched atop the mountain, staring health, down the crest, ready to launch into the abyss. What goes through their mind? Are they studying the mountain, addressing curves and paths, considering their descent? Do they foresee victory and triumph? Or, are they blinded by the possibility of failure and crippling disaster? For that matter, what goes through an actor’s mind as they stride the boards during that everlasting moment of silence before speaking their first line? Or a quarterback, staring down eleven men all ready to tear his head off, just one split second before calling “Hike!”? These are not moments cluttered by words, but by raw emotions. Days of my Youth, which will hold its world premiere
at the Boulder Theater on Friday, Sept. 12, is a skiing documentary
that lives inside these moments. It was a co-production from MSP (Matchstick Production) Films and Red Bull Media House.

This
documentary “examines skiing as a way of life, offering a glimpse into
the journey of self-discovery that every skier takes,” the press release
from Red Bull states.

Shot over the course of two winters, Days of my Youth takes place in the mountains of British Columbia, Peru, Alaska, Utah and Colorado.

“The
result is a film that truly captures the feeling of being a skier and
why people dedicate their lives to it in a way no other movie has done
to date,” says Scott Bradfield, head of production for Red Bull Media House.

The
film is one long meditation on what compels a person to ski at the
highest levels, to risk life and limb and plunge down the mountain.
There is no real story or plot to be found, but there is a climax and
plenty of reflection. This is not a narrative designed to entice the
public at large into the sport. No, this is a movie made for and by
die-hard skiers.

Days of my Youth employs
the framing device of former skier Bobbie Burns (now 82), the so-called
“Father of Free Skiing,” puttering about his cabin, looking at pictures
and reflecting on his past while various skiers tackle and conquer a
myriad of mountain ranges.

This dreamy association not only connects Burn’s
groundbreaking approach to the sport with the present, but it also
functions as Burns’s memory. He remembers the days of his youth while
famed philosopher Alan Watts tosses off
motivational one-liners on the soundtrack. These audio snippets are
charges to the youth in the audience, charges that Burns once heeded.
The most poignant one, “If you can dream it, you can do it.”

We see the skiers doing it. Their dreams seem boundless.

Who
are these skiers, these masked men and women of the mountain? Titles
with their names flash on the screen briefly: Richard Permin, Mark Abma,
James Heim, Michelle Parker, Cody Townsend, Markus Eder, Bobby Brown
and Sam Anthamatten. We learn little from them and less about them, but that is more than enough.

The vast majority of this movie, like so many others, was shot with small prosumer cameras. Days of my Youth benefits
from GoPro helmet-mounted cameras to give the skiers’ perspective. The
more this technology advances, the closer we get to virtual reality,
which is precisely where this type of movie is headed: All of the
thrill, none of the spill. Sure, some of the runs — especially the
climactic one through a narrow mountain crevice — make your stomach
rise, but none of them will twist your knee or break your ankle.

What
matters here is not the reality, but the show. And what a show. The
camera work is exquisite, jockeying back and forth from the GoPro helmet
cams to handheld photography and the latest in aerial filming
technology, the Cineflex Elite. These multiple perspectives provide each
descent a cubist approach, allowing the audience to take in all angles
of the performance. Slow motion is used not only to heighten the
impressive skills of the skier, but to provide them, and their run, a
sense of poetry.

Ski season is so close you can almost taste it, and Days of my Youth is a primer to get you into the spirit.

Can’t make it to Friday’s premiere or future exhibitions? Don’t fret, beginning in October, Days of my Youth will
be available to purchase on DVD & Blu-ray, iTunes, Google Play and
more. Watch it on your way to the mountain — it’ll get those juices
flowing.