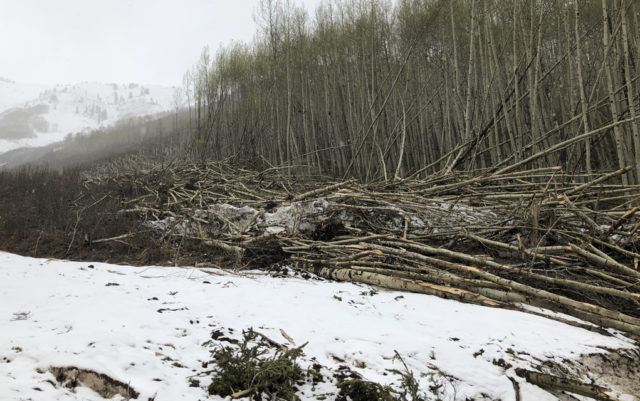 For Brian Lazar and many of his co-workers at the Colorado Avalanche Information Center (CAIC), the first two weeks of March 2019 was a grueling stretch of frantic avalanche forecast work only interrupted by short sprints of sleep. The days were long and the storms kept coming, the snow kept sliding.

“It was really intense,” Lazar, the deputy director of CAIC, recalls. “We were not only seeing some of the biggest avalanches that we’ve ever seen in the state, but the sheer scale of the cycle was historic too.”

The CAIC recorded over 1,000 avalanches in the state over those two weeks alone, but that number doesn’t tell the full story, Lazar says.

“The only thing we know for certain is that that’s a dramatic undercount,” Lazar says. “There were a lot more than that. A lot more avalanches that occurred that weren’t witnessed or reported.”

An avalanche cycle is the period of time when a sequence of natural avalanches occur. Often, a cycle is kick-started by a storm and usually ends within a few days. This extraordinary avalanche cycle in March triggered a cascade of information — one that will not end for many years. There’s a lot that scientists can learn from such a cycle to inform their forecasts.

Which is why researchers from CAIC, the Northern Rocky Mountain Science Center (NOROCK) and the U.S. Forest Service’s National Avalanche Center (NAC)spent much of the summer exploring that destruction. They scoured the vegetative ruin left in avalanche paths, cutting discs off of downed tree trunks, taking cross-sections and coring into those that had survived the slides.

They want to see what the trees can tell them about the March 2019 avalanche cycle.

“The biggest question we’re trying to determine is really, how often does a cycle like that one occur?” says Erich Pietzsch, a physical scientist at NOROCK.

Pietzsch says when a tree is struck by a snow slide, its bark is often scarred and its ring pattern changes. Some trees will grow more wood (bigger rings) on the downhill side of the trunk after an avalanche, to support its growth. Clues like these can help scientists to develop what they call an “avalanche chronology.”

“That allows us to try and date these avalanche events,” Pietzsch says. They can then catalogue how big different years were along that particular avalanche path. By taking hundreds of samples from many different avalanche paths, they will be able to put March of 2019 into historical context.

Over 800 samples were collected this summer, Pietzsch says, but that’s just the start. There are hundreds more still to be gathered and processed, and then comes the time-consuming part: lab analysis. The samples are all being sent to the NOROCK lab in Bozeman, Montana, where they’ll be analyzed and the data will be indexed.

While the results of that forensic tree-ring research might not be published for some time, scientists have other ways of gauging just how rare last year’s slurry of snow slides was, according to Pietzsch. By comparing old photos of avalanche chutes to images of how they look today, scientists can juxtapose two events separated by decades. And Pietzsch says they’ve found one rather telling photo of an avalanche path in Frisco.

“There is an image from 1899 which shows what we would call a similar ‘trim line’ to what we see now,” he says. “So [that suggests] the last time it looked anything close to what we see now was 120 years ago.”

That’s just one avalanche path, in one part of the state. But it indicates that at least in Frisco, last March might have been a 100-year-slide-cycle — a natural event that only occurs once a century.

Needless to say, years like that are intense for the forecasters at CAIC. It was the first time Colorado’s avalanche hazard rating was ever set to “extreme,” and Lazar and his team were on high alert for the entirety of that two-week period.

Backcountry users like skiers, snowboarders, hikers and snowmobilers rely on CAIC data and analysis to make informed decisions about where and where not to travel based on avalanche conditions. It’s a helpful tool that keeps adventurers across the state safe, but one of the most important duties at CAIC is to make sure that the state’s highways and roads are safe for public travel, which is a 24/7 job.

“The highways don’t shut down at night,” Lazar says matter-of-factly. And neither does CAIC.

That’s why the information gathered from last winter is so important to forecasters like Lazar: it better informs them for future events. A high-watermark season like that helps them understand the “ingredients” that need to be present to unleash such a devastating cycle: the slab layering, the temperature changes, the storm sequences and loading events. By unraveling those variables CAIC can fine-tune its predictive equations to be even more accurate.

And the more accurate their predictions are, the safer Colorado’s backcountry adventurers, roads and infrastructure are too.

Also important for infrastructure and transportation planning is to understand how these avalanche paths have changed since last year, says Pietzsch. Some run-out zones were left bald and treeless after last March, which could make some roadways or structures more vulnerable to snow slides than they have been in the past.

A big cycle like last winter’s also helps raise avalanche awareness among the public, Lazar says. The avalanche cycle of March 2019 was so widely publicized and visible that word about avalanche danger and safety spread fast among both technical backcountry enthusiasts and casual winter tourists.

There’s still a lot to be learned about what happened last March. According to both Lazar and Pietzsch, it will take scientists and forecasters a long time to sift through the wreckage and analyze all of the information they glean from it.

Nevertheless, that historic avalanche cycle may have better prepared this state for future avalanche events — thanks largely to the work being done at CAIC, and the research they’re doing in partnership with NOROCK and NAC.