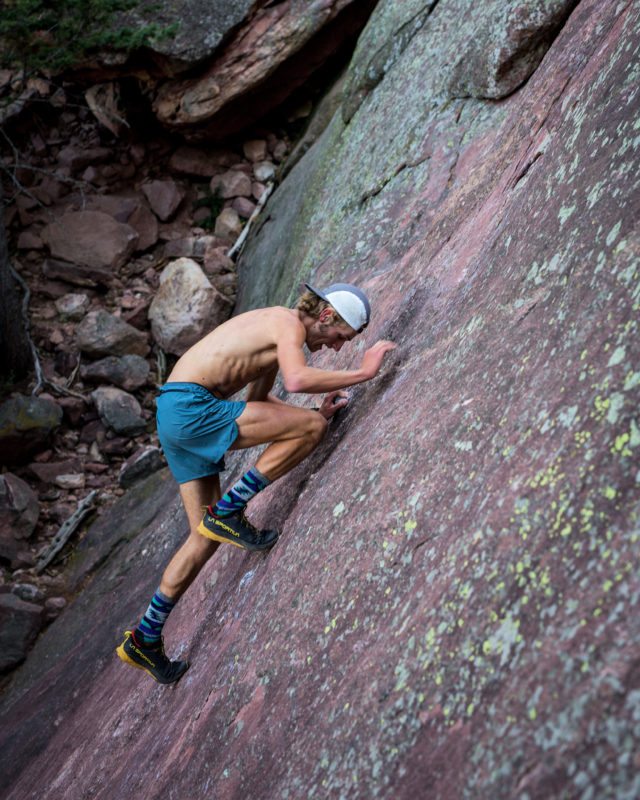 At 5:15 p.m. on Oct. 9, Kyle Richardson stands next to the water fountain outside Chautauqua’s Ranger Cottage. He’s wearing his signature look: a short-billed cap, no shirt, breezy running shorts, colorful mid-calf socks and trail running shoes. This evening, however, he also cinches a climbing harness around his waist and thighs, and tucks a belay device into his shorts. He cues “trail run” mode on his GPS watch. Satellites ping above him as clouds roll in.

He pushes “start” and immediately tears up the steep-but-smooth Bluebell Road trail, which leads southwest, toward the Flatiron formations that tower over Boulder like a row of jagged teeth. In 13 minutes and 24 seconds he reaches what’s known as the East Bench — the most popular entrance to the vertical terrain of the Third Flatiron.

There, Richardson doesn’t miss a beat. He presses palms to rock, churns hand over hand, foot over foot, like a dry-land doggy paddle, soloing more than 1,000 vertical feet up the precarious terrain as fast as the push-pull relationship between his quads, lats and gravity will allow. Six minutes and 58 seconds later, he stands on the summit, but doesn’t pause to take in the view.

His goal, to top the Third Flatiron and return back to the Ranger Cottage faster than anyone ever before, is no easy feat, given past speed records have been held by his idols: Anton Krupicka, Buzz Burrell, Bill Briggs, Stefan Greibel and the like. Could he get all the way back down in less than 12 minutes and 30 seconds?

The first ascent of a Flatiron happened in 1906, when a pair of twin brothers spent hours soloing up the Third Flatiron’s east face, recording the first-ever rock climb in all of Colorado history. Since then, thousands of people have scrambled up the seemingly endless third- to fifth-class routes spiderwebbing up the slabs intersperesed between Green Mountain and South Boulder Peak.

“You can just go do miles and miles and thousands and thousands of feet of vertical in such a concentrated area, and never really know the full extent of it,” says Richardson, who grew up in Austin, Texas. Last year, the 23-year-old graduated from the University of Colorado Boulder, and it was during his undergraduate tenure that he began to merge his love for running with climbing. Over the past four years, he’s set records on long, harrowing technical traverses in the Rocky Mountains (the 30-mile LA Freeway) and Utah’s Wasatch Range (the 36-mile WURL). He estimates he’s soloed the First Flatiron, the tallest and most technical formation of Boulder’s bunch, more than 320 times.

With his heart beating fast on top of the Third Flatiron, Richardson clips two ropes into his belay device (his friends had set them up beforehand) and lowers himself off the backside, dropping 240 feet at near-palm-burning speed. He unclips his device and sprints down the loose, rocky trail toward Bluebell Road, where he busts out a four-and-a-half-minute mile pace, pounding toward the Ranger’s Cottage.

He hits “stop” on his watch: 30 minutes and 26 seconds. A group of his friends swarm him with smiles and high fives. It’s a new speed record, with 2 minutes and 1 second to spare.

But he recovers quickly. Less than a week later, he suits up again — short-billed cap, running shorts, crazy socks and trail running shoes, but this time no harness — and sprints up the First Flatiron, soloing its 1,000-foot technical face.

He reaches the summit in 20 minutes and 30 seconds, downclimbs the back of the formation in 60 seconds flat, and then hauls himself back down to the Ranger Cottage for a total time of 30 minutes and 19 seconds — adding another speed record to his name.

“There’s such a good community of people that like to do this stuff around here,” he says, crediting their mentorship and support, both in recent years and during his time-trial efforts, for his success as a mountain-athlete budding in the elite scene.

He thinks going sub-30 minutes on either the First or the Third Flatirons is possible. Much like the two-hour marathon, he says, “I think it’s cool to set the bar and see what’s possible in the future.”

Disclaimer: Soloing the Flatirons is serious business and should be reserved for those with experience and acute knowledge of the terrain.