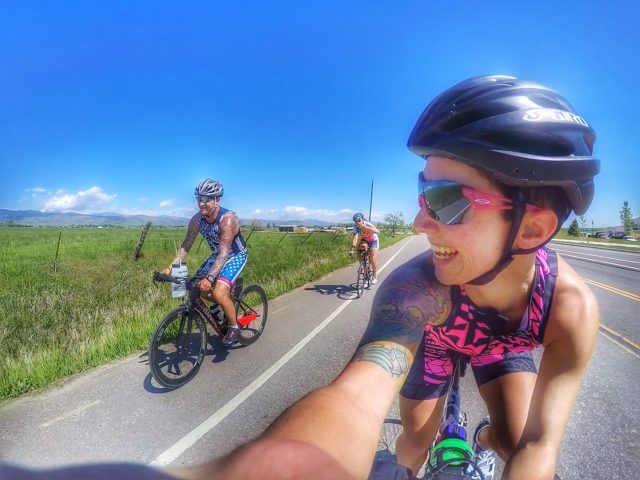 Ty Tomlinson met his girlfriend Michelle Hughes in 2009 while she was auditioning to be a model for a fashion show he was co-producing in Denver. Their first interaction typifies the nature of the relationship they would end up building.

“I told her she wasn’t right for the fashion show, but someday she would be my ex wife,” Tomlinson told me in 2014.

“She did laugh,” he assured me.

Tomlinson is a hairstylist, and I’d started going to his Denver salon in early 2014. Odds are pretty high he told me this story while we stood out back of the salon, my hair full of foil wraps, smoking cigarettes and drinking glasses of whiskey on the rocks.

My naturally blonde hair was dyed black the year I met Tomlinson, so I spent a lot of time with him in the salon as he helped me ease my way back to blonde. I heard more about Hughes as the months passed: She was an engineer, graduated from Colorado School of Mines, and she was preparing to do her first half Ironman.

And as the year progressed, she dominated the 18-to-24-year-old age group.

“She entered six races in 2014 and won five of them,” Tomlinson tells me as the three of us sit drinking cocktails at his mother’s house this Memorial Day weekend. “First place. Like, podium.”

Now in 2016, after two years of cheering Hughes on from the sidelines, Tomlinson will be joining her on the course of the Boulder Ironman 70.3 on June 11. And after two years of seeing what she’s capable of, Hughes plans to run her first full 140.6 Ironman in Boulder on Aug. 7.

The two have been together for seven years now, and while they’ve always played golf and traveled, taken the occasional run, supported each other in all their endeavors, they’d never really imagined doing this together.

Hughes has been a swimmer since she was a child (the sport in which she says many triathletes don’t have a strong base) and she did some sprinting in high school track, but she hadn’t touched a bicycle since she was 12 or 13 — until she decided to do her first Ironman 70.3 at age 24.

Now at 26, the 5-foot-tall Hughes is teetering on the brink of turning pro — she has sponsorship from HoneyStinger, Tritats and Nuun, and she’s amassed an Instagram following of more than 5,400 people with underwater swim shots, GoPro snaps from the saddle of her bike and charming pictures of the tiny beauty in compression socks after a hard day of training.

But after the success of her 2014 season, she found a new challenge in 2015 as she entered a new age class.

“It gets harder the older you get, which is pretty unique in competitive sports,” Hughes says.

Hughes placed fifth in New Orleans, fourth in Boulder and third in Cozymel half Ironman races in 2015. No first place finishes, Tomlinson says, “but all knocking on the door of the next age group.”

“She did better the year she didn’t know what the hell she was getting herself into,” Tomlinson says. “There’s a naïve sense of greatness that possessed her that year.”

The naivety is gone, and this year Hughes feels confident she’s found her sweet spot. With Tomlinson training with her, she’s avoided the over training she thinks might have taken some of the wind out of her sails last year. And she’s no longer the “baby” in her age group.

For mere mortals, the idea that a triathlon would bring balance to our lives might seem counter intuitive, but such is the case for Hughes, who was a competitive bodybuilder for a number of years before she took up triathlons. In bodybuilding, she found the end result often didn’t match her effort.

“I was tired of having people tell me whether I was good enough to be in the top spots,” she says. “There was a time when I went to a show and I felt I looked my best and everyone told me I looked my best and I didn’t place. Then I went to another show and ate what I wanted to, worked out when I wanted to and I placed. This was creating a problem that I’d never had before.

“I needed to do something that’s about solely what I put into it. When I did the first triathlon I was like, ‘Perfect. I found it,’” she says. “But it took some time before the body image issues went away.”

Right now Hughes and Tomlinson are in “peak week” of training. They’ve just spent a little more than five hours completing a “brick,” or training multiple parts of a triathlon. Before sitting down with me, they met up with about a dozen other triathletes at the Boulder reservoir, where the Ironman will launch out on June 11, and did a 70-mile bike ride and a 6-mile run.

We talk about the gear they are using and how much all of this triathlon gear costs, and finally, why Tomlinson decided to put down the smokes and whiskey and embark on this madness with Hughes.

As the nature of their relationship requires, Tomlinson’s entrée into the world of Ironman came from a bet he made with Hughes.

“One day, out of nowhere, he was like, ‘I can do an Ironman,’” Hughes tells me. “And I thought that would be great. But at this point he’s smoking, he’s drinking.”

Tomlinson was interested in upping the ante with a bet, so Hughes suggested $100.

“I said, ‘Listen, we’re not rich, but with all due respect, you’re an engineer and I own a business — is $100 gonna make a difference?’” Tomlinson remembers.

So they made it a cool grand.

“I guess you can say that was his motivation to start training,” Hughes says.

But there was more motivation than the money.

As he’d watched Hughes race over the past two years, Tomlinson had picked up on lots of tips, like how the best athletes moved on the land, in the water or on their bikes, and he’d share these tips with Hughes. But other folks often took Tomlinson’s advice as egotistical since he wasn’t running the triathlon — and he was still smoking.

“I think sure, the bet came from fun for the two of us,” Hughes says. “But it also came from a deeper place: ‘Hey, I’m going to prove you wrong,’ which I get because as a female that’s all you hear: ‘You can’t do that.’”

“That was our connection,” Tomlinson says. “Both of us knowing how it feels for people to tell us that.”

Tomlinson stopped smoking the day after he made the bet with Hughes and he hasn’t picked up a pack since.

For Tomlinson, being by Hughes’ side also meant motivating her to push harder.

“She didn’t want me to go out there and keep up with her when she’s done so well,” he says. “If I can get her to turn the corner from a top amateur age grouper to going pro, if it’s just that little bit that she needs, it was worth every penny of that thousand dollar bet.”

Hughes says pro female triathletes typically clock in around the lower end of the 4-hour mark in a 70.3. Currently, Hughes is clocking between 5 and 5:15.

Tomlinson’s got better expectations for her, though: He thinks she’ll finish at 4:48:15.

Tomlinson’s going to color my hair this Saturday, and as always, we’ll laugh and have a good time, but I know those clandestine cigarettes in the back of the salon are something of the past. But maybe we’ll still have a whiskey, just to celebrate, because honestly, he’s doing a pretty exceptional thing. They both are.