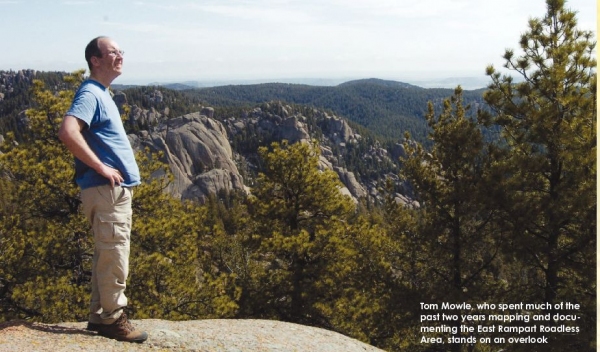 Across the road from the dirt bikes and ATVs in Rainbow Falls, Colo., is a different world.

“As you can see, we’re the only people here. You can hike for hours without running into anybody,” he says, on a recent Friday morning hike in this area.

It’s the East Rampart Roadless Area, one of hundreds of places Colorado has proposed to restrict road-building. The U.S. Forest Service in 2008 called it the “largest and least human-impacted area remaining in the Rampart Range.” It’s an important link between the prairies and foothills for animal species and a rare expanse of unspoiled forest adjacent to the Front Range.

Mowle has hiked, catalogued and mapped the rugged wooded hills, serene meadows and rocky spires. He convinced the Forest Service to expand the area’s boundaries by 5,000 acres.

Now Mowle and the Colorado Mountain Club are trying to spread the word, through a website and public meetings.

“If people don’t know the area exists, they’re not going to fight hard to say, ‘Yeah, we want to keep this area,’” Mowle says.

Colorado
Gov. Bill Ritter supports the roadless rule, currently under review by
the federal government, to restrict road-building on some 4.2 million
acres of public land.

Environmentalists
are divided on the merits of the proposal, because of exemptions
allowed for ski area expansion and forest thinning, as well as mining
and drilling activity.

The
only roads into the Rampart East area are rugged fourwheel-drive paths,
and it’s easy to see why. The pine-covered hills are steeper than they
look from Interstate 25, with narrow grassy valleys and babbling
brooks. Bizarre rock formations, similar to those found near Dome Rock
just west of Pikes Peak, rise abruptly, seemingly out of place.

“Every
valley seems to have its own characteristics, interesting rocks that
pop out of nowhere and a lot more ruggedness than people expect,” Mowle
says.

The area has
long been a locals’ playground, and it is interspersed with numerous
unmarked side trails and spurs, accessed from Palmer Lake on the east
and Rampart Range Road on the west. For the best introduction to the
area, hike the 6.6-mile loop starting in Palmer Lake.

For
Mowle, it’s a special place worth protecting, within sight of I-25 from
overlooks, with an atmosphere that is much more remote.

Every valley seems to have its own characteristics, interesting rocks that pop out of nowhere.

“There
are very few low-elevation protected areas. Most of our roadless areas,
wilderness are at higher elevations, but here’s about 30,000 acres,
which makes it one of the largest roadless areas between Denver and New
Mexico,” he says.

ATVs don’t often make it into the area from Rainbow Falls, but the area could face another threat: drilling.

According
to the Forest Service, there are oil and gas leases on 7,500 acres of
the roadless area. A Texas company, Dyad Petroleum Co., is seeking
agency approval to drill test wells for natural gas near Mount Herman,
south of the roadless area. While it’s a “wildcat” venture, with low
expectation of finding any gas, success could lead to drilling in the
roadless area.

And
Colorado’s roadless rule would allow them to, since the leases were
issued before 2001, when President Clinton first proposed a federal
roadless rule.

Mowle,
who is the El Paso County public trustee, a postion appointed by the
governor, declined to comment on the roadless controversy.

But, he said, “Long term, the only way to preserve this kind of area is if people do know about it.”