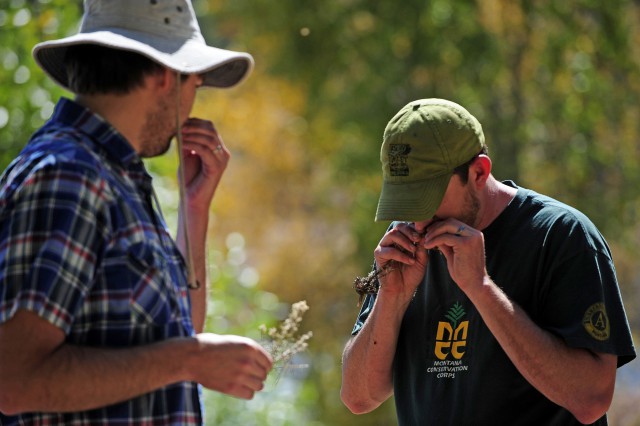 I wished for a beer.

Sure, the steep hike up Catamount Trail near Colorado Springs, in the heat of Indian Summer, had left everyone thirsty. But this was more than a longing for some suds.

We had spent the entire hike talking about beer. In fact, we were learning that beer was all around us, just waiting to happen.

It was the sixth in a series of hikes known as Beers Made by Walking, organized by homebrewer Eric Steen.

Guided by a brewer and a naturalist, hikers explore different ecosystems of the Pikes Peak region, learning what plants and herbs can be used to brew beer.

Using the ingredients identified on the hike — ordered from a natural-foods store, not picked, because foraging isn’t allowed in parks and national forests — the brewer makes a batch of beer.

The best part: A few weeks later, hikers get to try the beers.

“I’m interested in the way our landscape can tell us so much about where we live,” said Steen, who runs the blog Focus on the Beer. He saw the program as a natural meeting of his love of beer with love of the outdoors.

“I really do think of [brewing] as an art form, and ultimately it brings people together, and beer does, too,” he said.

“I was a little wary, but I was pleasantly surprised.”

That is hiker Zenia Brink’s take on the beers from the first several hikes, introduced to the beer-drinking public at a tasting in August.

There was a bright pink prickly pear wheat, a Belgian IPA with chokecherries, a smoked brown with piñon pine nuts, and an amber with juniper, three-leaf sumac berries and ponderosa pine needles.

As we strolled the foothills above Green Mountain Falls, I was surprised how much of the flora is edible. The region’s topography and overall climate help create many micro-climates where a variety of plants thrive.

Tom Brown, a brewer at Trinity Brewing Co., had used rose hips in beer, but otherwise had little experience brewing with ingredients from the wild.

“It’s good to know, if I’m stuck out in the middle of the woods, what can I eat along the way,” said Brown, the brewer along for our hike.

He originally considered an amber brew, flavored with flowers found on the hike. But the north side of Pikes Peak in early autumn offered no petals, so he is making a wheat beer with bee plant, evening primrose, tansy mustard, amaranth and rose hips.

That is the last way to find out if something is edible.”

That’s Gayer’s warning to one hiker, as the naturalist points out what could be edible berries. They could also be deadly.

For every edible mustard, there is a hemlock, hellspawn or death camus, plants poisonous to humans. Hellspawn Imperial Stout might have a nice ring to it, but don’t expect it on the menu at a tasting.

Even with extensive education, Gayer isn’t comfortable eating a wild plant unless he can see the flowers in spring and analyze the plant with a computer. Too much in nature is deceptive, and even with detailed guidebooks, fatal mistakes occur.

“People believe they understand nature and they read books and they can be experts. We come out here, we know the outdoors, but we don’t know it like the pioneers who came out here and lived off the land,” he said.

Even juniper berries, eaten since Biblical times, can be fatal.

Said Gayer, “They’re great. Make gin, but don’t just chow down. They will eventually give you hallucinations, and your heart will stop.”

Nervous laughter followed that bit of wisdom. Juniper berries were used in one of the group’s first beers, though Gayer said it was far below the dose that could poison someone.

So, what could you eat locally in the wild to survive?

It’s easy to think of Colorado’s pine and aspen forests, the tundra and the scrubby plains, as simply scenic playgrounds, places hikers, cyclists and hunters go to exercise and escape the pavement and traffic of city life.

But walking these areas with eyes to the ground made me realize that the wild places, even those that look barren, are rich ecosystems that sustained lifelong before “Pikes Peak or Bust.” In a pinch, they can even sustain ours.

It also made me, as previously stated, very thirsty. This summer’s hikes were fully booked, and while they are over for the year, Steen hopes to hold the hiking series again next year and expand the program to other beer-loving cities.

Joked Steen, “Drink as much as you want, or until you die from juniper poisoning.”