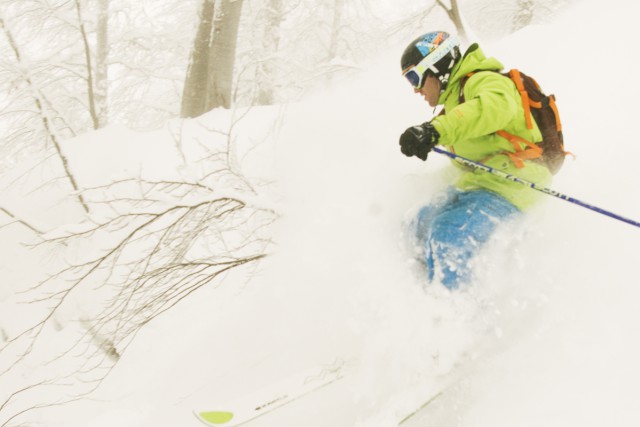 When it comes to winter sports, Olympic athletes tend to get all the attention. But Colorado athlete Griffin Post has been quietly toiling away as a big-mountain competitor on the Freeride World Tour for the past two years. This tour — which features four showcase events held at Sochi, Russia; Chamonix, France; Squaw Valley, Calif.; and Verbier, Switzerland (along with 13 qualifying events) — is the ultimate test of man against mountain.

Unlike Olympic ski racing, where courses are prepared, inspected and manicured, the venues for the Freeride World Tour are untouched mountain faces. Avalanche control work is done, but that’s about it. The snow can be everything from deep powder to windcrusted hardpack; cliffs, chutes and other obstacles are common, with athletes choosing their own route down, and judges determining the winners. Boulder Weekly caught up with Post between events at Chamonix and Squaw. Currently, he sits in 17th place in the overall standings as the tour moves towards the penultimate venue for big mountain skiing and snowboarding: Verbier’s Bec des Rosses.

Boulder Weekly: Tell us about what you do as an athlete. What exactly is the Freeride World Tour?

Griffin Post: The FWT is a series of big mountain skiing competitions throughout the world. Essentially, there’s a start gate and finish gate on a face, and it’s up to you as an athlete to find the most impressive way through the cliffs and terrain.

BW: Why does this kind of competition appeal to you?

GP: It’s the most natural form of skiing — no man-made features — just you versus the mountain.

BW: What is your skiing background?

GP: I raced Division I in college, then pursued Skier X for a couple years before finding my calling in big mountain skiing.

BW: You’re working with Kästle, a brand that has reinvented itself. Tell us about that relationship. How is that working out?

GP: I started working with Kästle three years ago after being with a larger company for a number of years. It’s amazing being with a company that doesn’t see you as just an athlete, but also values your input on products, marketing and expeditions. Kästle is also small enough where you don’t have to deal with the bureaucratic nonsense of the bigger companies in the industry. I’m super-motivated, and it’s nice to have a company behind you that is eager to support that motivation.

GP: I’ve been fortunate enough to ski some of the most amazing resorts in the world: Chamonix, Verbier and the Arlberg in Austria.

BW: What do you do when you are not skiing? What keeps you busy in the summer?

GP: I mountain bike, climb and think of crazy schemes for next winter.

BW: What is the future of skiing? How do you see the sport evolving?

GP: I think you’ll start to see a lot of smaller, niche companies. From ski manufacturers to film companies, the startup costs have gotten a lot lower, and it will be cool to see these new companies that serve the needs of really particular areas of the ski industry.

GP: I like to think of them as “learning” experiences. Sometimes when you’re filming or competing the pressure can really cloud your judgment. I think it’s important to always take a step back and ask yourself, “Everything else aside, is this really a good idea?”

BW: For someone who wants to do what you do, how should they start?

GP: I’d start at some of the lower-level comps at Aspen and Telluride. These competitions give a good perspective about where you stand. You may also find out that competition isn’t your thing, which is completely OK. Also, ask for help from everybody, but don’t expect help from anybody. Some of the people that have gone out of their way for me I’d never have expected it, and others who I’ve expected help from have totally snubbed me.

GP: I can’t say that I look up to a particular skier. I try to look at athletes that are really excelling in other sports and apply what they’re doing to skiing — this makes me feel like I’m being influenced rather than copying. Travis Rice, for instance, he’s so far ahead of snowboarders (and skiers, in my opinion), he’s really changing his sport. Guys like him are what motivate me to keep pushing it.

GP: I had a ski coach that, whenever we complained, would tell us, “There’s no bad snow, just bad skiers.” I think that’s super-applicable, particularly this winter.

Learn more: You can check out photos, videos and other cool stuff, including athlete interviews from the Freeride World Tour at freerideworldtour.com.