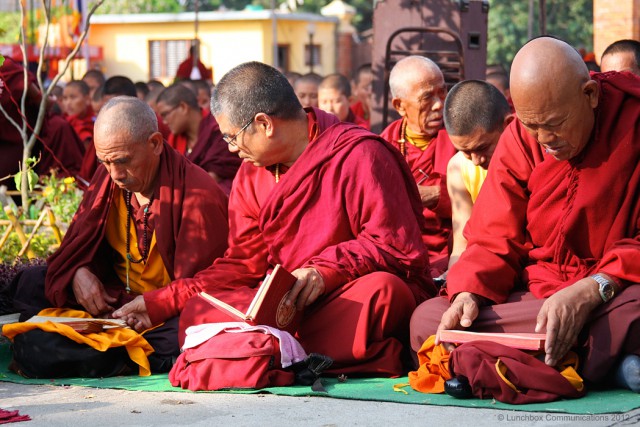 Imagine a trove of knowledge as vast and extensive as the famous Library of Alexandria, heralded for its archives of literature from antiquity and destroyed in the first centuries of the Common Era — burned, in the best of the legends about its destruction, in a fire that took six months to work through the documents that contained what was then the best and most comprehensive collection of the world’s knowledge. Imagine a collection that big burning in an even slower fire, one that was eating away at some 17,000 volumes that catalogued a thousand years of study on Buddhism, and one man stepping in to beat the flames back.

“It wasn’t a fire that would have happened in a day that wiped it out, it was happening over 20 years and Gene saw that and prevented it from being destroyed,” says Gregory Beier, director of sustainability for the Tibetan Buddhist Resource Center. “He saw that the library of Tibet was burning, the great library of Alexandria of Tibet metaphorically speaking, was burning and he thought that it shouldn’t go and he saved it.”

Gene Smith grew up in Utah, a Mormon who was accepted to West Point but turned away at the last minute and, because it was during the Vietnam War, enrolled at the University of Washington in the study of the language he thought would take him the longest time to learn: Tibetan. That study opened the door to him traveling to Delhi, India, where he continued studying Tibetan Buddhism and took a day job for the Library of Congress. The sounds of his typewriter were known to carry on late into the night as he worked to catalogue the texts he’d found.

“All the libraries were fragmented. Everything was here and there, and he pulled it all together again,” Beier says. “He said it’s an incredible tradition, it’s such a beautiful, brilliant tradition, he thought it was absolutely imperative to support it and keep it alive.”

The work that Smith undertook from when he arrived in India in 1965 until his death in 2010 was the focus for Digital Dharma, a film directed, written and produced by Dafna Yachin.

The film was a tough sell: “People would say, ‘Nobody wants to hear a story about a librarian,’” Yachin says. Even Smith was tough to convince.

“Gene was so humble, he didn’t want this to be about him,” Yachin says. “We spent probably a year convincing him.”

They put seven years into making the film anyway, traveling with Smith to India to film him with Tibetan lamas and record the process that went into saving those documents: scanning them, reprinting them and creating a library that now stands in southwestern China, an assembled collection complete for Tibetans to access in the land that those texts originally came from.

Smith also delivered hard drives loaded with digital versions to monasteries around India, and, in 1999, founded the Tibetan Buddhist Resource Center, which preserves and makes available online all the Tibetan texts he collected. Those resources have been accessed in more than 66 countries. The work earned a letter of accolade from the 17th Karmapa Ogyen Trinley Dorje, who will one day stand in for the Dalai Lama. The Karmapa wrote, “I would like to express both my unqualified support for the TBRC and my gratitude to them for their unique contribution to the preservation of our Tibetan heritage. It is heartbreaking that so many irreplaceable works have already been lost, destroyed during the Cultural Revolution. At a time when the cultural identity of Tibetans is under threat and the future of the Tibetan people seems so uncertain, I offer heartfelt prayers for the success of this project.”

Preserving the texts of Tibet was never Smith’s day job. It was always work done in his spare time.

“You don’t get to meet a man like Gene very often in life,” Yachin says. “He taught us what purpose in life meant.”

Smith spoke 32 languages and spent his time committed to telling stories. He answered emails late into the night, believing that every person deserved a response — emailing Smith was a rite of passage for those studying Tibetan.

Yachin, who has her own production company, Lunchbox Communications, says she hopes people come away from the film looking for the journey and the mission in their own lives.

“What’s our next mission? How do we help whatever it is?” she says. “It’s how to live a life. That’s what we tell people. That’s the message of the story. What’s your mission, what’s your purpose?”

Digital Dharma: One Man´s Mission to Save a Culture will play at 12 p.m. Feb. 15 at the Boulder Theater. See www.biff1.com for more information.

This story is part of our complete coverage of BIFF 2013.