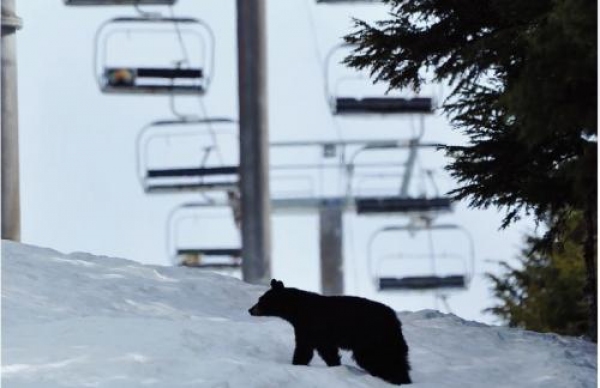 Nature’s alarm clock is ringing early for black bears, and some aren’t hitting the snooze button. Recent warm weather in Colorado — temperatures as high as 75 degrees — is stirring some bears from their dens a few weeks early, and officials are reminding residents in bear-prone areas to start being careful with their trash.

“‘Early’ is kind of subjective when you’re talking about nature,” says Randy Hampton, spokesman for the Colorado Division of Wildlife.

Most bears come out of hibernation from late April to early May, but individual bears can come out sooner, he says.

There have been spotty reports of roaming bears in the mountains. In Colorado Springs, residents have reported a mother and two cubs wandering in the northeast part of the city, Hampton says.

“Certainly, warmer temperatures probably are contributing to this,” he says. “Is it early for a couple of bear calls? No. Is it early for lots of bear activity? Yes.”

The warm temperatures trigger the bears’ instinct to awaken, and since many bears hibernate in snow-covered dens, the melting of the snow brings sunlight in. Hampton says there is not a concern about these bears starving from lack of vegetation or berries, because newly emerged bears will consume mostly water and grasses for now.

“You don’t just wake up and start scarfing down food. Bears slowly, over a period of several weeks, will begin to warm up their system,” he says.

Unless, that is, they find your trash or pet food.

So the DOW has been reminding residents to use bear-proof trash containers and take them to the curb in the morning, not the night before.

Residents should not leave pet food outside or stock bird feeders where bears can get to them. Hampton also says residents should keep their garages closed and cars locked.

What do you do to protect yourself from bears in the backcountry?

• Be on the lookout. In open country, use binoculars to scan the horizon.

If you are in the woods, make plenty of noise so you don’t surprise a bear. Bears have poor eyesight, but they will often leave the area if they hear humans.

• Don’t leave food unsecured or even in a car. Always use a bear-proof container, especially if camping overnight.

• Keep an eye out for climbable trees in case you need to put distance between you and a bear. Black bears are agile climbers, and they can run quickly, but climbing high in a tree might be your only option if a bear considers you a threat. Never run, because a bear can always outrun you.

• If you see a bear and it doesn’t see you, retreat downwind as quietly as possible.

• Always carry bear spray, and make sure that it is quickly accessible. Practice quickly getting it out and preparing to spray. Bear sprays are an effective deterrent in very close range, emergency situations.