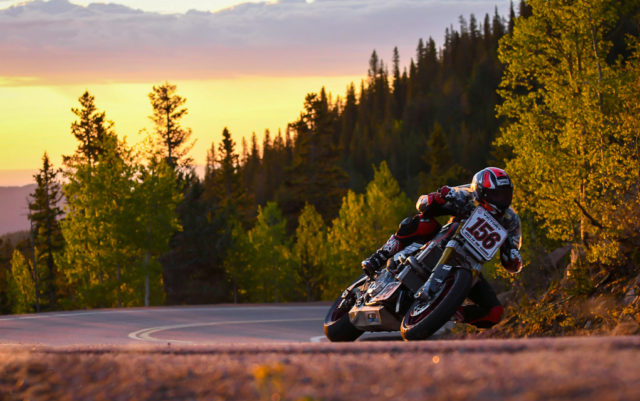 Ian Reid arrives late for his interview. He’s hard to recognize at first, with a full-face helmet and motorcycle leathers giving him an urban invisibility during the late afternoon rush hour. He’s full of energy and stoke and stress: a Baja trip just around the corner, bags to pack, work to do and life a full-on screaming rush not unlike going full throttle down the crowded city street on the motorbike he’s riding.

Reid is on a roll. Over the past two years this Boulder resident has made a full-time career change to photography. And, while he’s a master at landscapes, light and motion, his focus and passion is on dirt and adrenaline, shooting motorcycle racing, all of its dirt-driven variants and the cultural mayhem of that loud, fast world.

In a sense, this work is a return to Reid’s younger days, when he was a kid in the California desert and there wasn’t much to do except mess around with bikes. But it’s too easy to look at his current calling as a “return to the future” act, because his work with the camera and the images he captures aren’t the stuff of youthful experimentation. Rather, they’re artful compositions that owe a great deal to a maturing vision that turns motion into art.

Reid picked up a camera because he felt he had to. “I spent a career skiing and traveling on expeditions,” he recalls. “I was spending time with some of the greatest photographers in skiing, guys like Mark Shapiro and Ace Kvale. These were people who were creating the standards for skiing photography in the 1980s. They were the best.”

But while Reid was skiing with some of the best photographers in the world, when it came to action sports and mountain visuals, one thing was missing. “I couldn’t get them to get on a motorcycle,” he says with a laugh. “So if I wanted to capture those experiences, I had to craft my own skillsets.”

Reid, who grew up skiing, was also no stranger to motorcycles. He started riding as a raw kid of 13, on a bike that some neighbors lent him. It was an expertise that came quickly and easily, due to youthful skills honed as a BMX cyclist. In fact, it’s not unusual for the pre-teens who grow up riding BMX to graduate to motor-powered fun, as the elements of balance, speed and catching air of BMX translate well to making the leap to larger, faster gasoline-powered machines. This is especially true in the communities in California’s desert, where open landscapes provide opportunities for endless adventure.

“My neighbor allowed me to ride a spare motorcycle they had,” recalls Reid. “And I was really into it; it was so much better than BMX, you could go a lot faster. So then I got a paper route and started saving money to get my own bike. My dad saw how hard I was working, so he sat me down and we worked out a deal where he helped get me a bike, and I kept working to pay it off.”

It was an auspicious start, and Reid quickly moved up the food chain to bigger and faster machines.

“At 18 I didn’t want a car,” he says. “I wanted a motorcycle, a Kawasaki GPZ 550. I was at that period in my life addicted to speed. In the desert where I was a kid, you did one of two things: take drugs or ride motorcycles. I rode motorcycles.”

While Reid says that his habit of twisting the throttle did come with some issues: He admits to speeding tickets and a “lost license,” although he still won’t divulge exactly how much he ended up paying in fines for his transgressions. But along with the tickets came opportunities, including the realization that you could go as fast as you wanted if you were racing, and that the controlled environment of dirt tracks and everything associated with those race events offered amazing opportunities to take photos of a sport he was enamored with.

“There was a motocross event at Mammoth [Lakes, California], and that’s where I took my first photos,” Reid remembers. “They all sucked and I had no idea what I was doing, and then I got distracted by skiing.”

Skiing and a short stint at the Air Force Academy are what brought Reid to Colorado. Of his time in Colorado Springs, he says, “I didn’t have a problem with authority, I had a problem with assholes.”

Regardless, he was drummed out of the school after only one year, due to an unacceptable accumulation of demerits. But the Colorado lifestyle was a blessing. He got back into cycling (the human-powered kind) and spent his winters skiing. He also became involved with the outdoor industry, working with brands like K2, and started traveling to Europe, where he was thrown into the pot with Verbier-based expats Kvale and Shapiro. Shortly thereafter he picked up a camera again.

“As I traveled for work, if there was a race or something happening and I could shoot it, I would go shoot it,” Reid says of his return to photography. “It took me five years until I felt that my work was at a professional level, and I started to get paid for what I was doing.”

Now, even farther down the road of experience and having made a commitment to photography full time, Reid is in the proverbial fast lane, shooting a diverse array of events, from skiing to motorsports. Recent projects include the Dakar Rally, as well as the famed Hahnenkamm World Cup downhill ski race in Kitzbühel, Austria. In between, there are events in Mexico, California and Utah.

Reid is busy, but argues that he’s still refining his technique and style. “I try to shoot without a flash,” he says, which is admittedly difficult when you’re dealing with subjects traveling in excess of 100 mph. He also says he, “looks for lines and angles that work with the lighting to create special images.

“I focus on moments,” Reid says. “It gives me personal reward knowing that I’m catching a unique image that people appreciate. A moment that can never be recreated.”

And in between the moments, the road miles, the sleeping in the dirt and the action and adrenaline, Reid remembers one thing, perhaps the most important thing.

“You need people to believe in you,” he says.

Just like a neighbor who believed in a 13-year-old kid and lent that kid his first motorcycle.